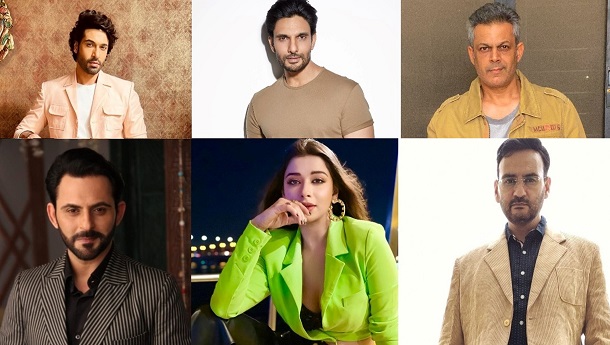 Ranveer Singh’s fashion choices have always been in the news. Yet again, the actor has set the internet ablaze with his nude photoshoot for Papar Magazine. The cover of the magazine features him sitting on a carpet, nude, his hair well-groomed and the actor seems to be nonchalantly posing for the camera. His fans and netizens went crazy seeing these photos and it goes without saying how much the meme-team enjoyed the day for having got such an opportunity. For those not in the know, this photoshoot is the actor's homage to Burt Reynolds’ iconic 1972 shoot for Cosmopolitan magazine. Celebs share their reaction after seeing these photos. They also weigh the possibility of them doing something similar.

When I saw Ranveer Singh’s picture for the first time I was like ‘only this guy has the guts to do something like this’. He pulled it off with so much ease. After Milind Soman, Ranveer Singh is the one in today’s generation of actors who can pull this off. For the movies when the scene demands there were actors like John Abraham who did for a torture scene, Nil Nitin Mukesh did for a movie called Jail, Aamir Khan and Ranbir Kapoor also pulled it off in the movie PK. When the story demands, the actors have done it. But to do something like this for a big domain, for a magazine that too for an Indian celebrity is amazing. We stay in a democratic country where more than appreciation you get hatred for doing something like this. We live in a modern society but still have our cultures intact where such things don’t work. When I read the caption that said “I can be naked in front of thousands of people, I don’t give a sh*& (sic)”, it is so true because he had also been emotionally naked for a few of his film scenes. Being an actor you have to be besharam sometimes, so doing something like this is okay. The important thing is that you should be comfortable and confident to carry it. Hats off to Ranveer, and good luck to him! If I am given an opportunity like this, some day, some time then why not? You have to be gutsy to do something like this

To each his own, I think breaking norms takes guts and there are far too many norms required to be broken in our society. We all are a bundle of energy and someone like Ranveer Singh is blessed with such an extreme level of energy that should be seen as an inspiration. Not that I am encouraging nudity for no reason but I do respect his freedom of expressing his creativity in his own ways. And the pictures that I have seen so far are creative work and not at all vulgar. As far as I am concerned, I don't think I have the guts to go nude on screen.

He did it for a shocking reaction and he is getting it. Today because of OTT there is very little left to imagination. He has a good physique, but I think the photos could’ve been shot more aesthetically. Rest is “show business”, so nowadays, people are busy showing off.

I personally find such pictures as an attention-seeking tactic. Now that’s a personal choice how one wants to market him/herself in showbiz. I think people know what works for them. I would not do anything of that sort, not because I am shy but I have a different approach in life.

We all know Ranveer Singh. He is known for expressing his opinion and is a very transparent actor and human being. He doesn’t believe in pretending and did what he wanted to do. For me it was a body shot and none of the private parts were exposed but personally when it comes to me, I am not that open or frank and comfortable to do a nude shoot in front of any other person. I am not comfortable doing in front of the crew where the photographer and make up artists are preset, so each to its own

I don’t think I would want to click naked like that.  It depends on person to person.  There are many actors who clicked like this in the 90s and created a sensation. I think people are open minded now