Ammajis suspense to be out in Dangal TVs show Nath Zewar Ya Zanjeer! 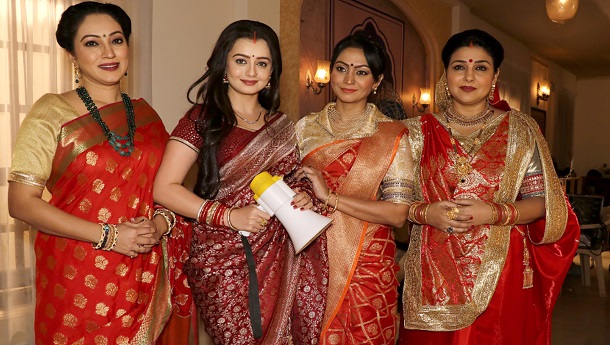 Dangal TV's No. 1 show Nath Zewar Ya Zanjeer has completed 150 episodes and the new twist is giving a full dose of entertainment to the viewers. In the upcoming episode, Mahua has assumed the form of Durga and has got Ammaji to confess the truth. The audience will also be surprised and will be hooked.

Chahat Pandey, who plays the role of Mahua, said, "Mahua wants to protect Shambhu, because Shambhu's life is under threat, this is what Mahadev is indicating to Mahua. Mahua wants to know the truth from Ammaji about what happened 20 years ago? And the girl who has come to the house, Tara, has to find out who this girl is, where has she come from. Why is she doing all this, maybe she has some other intention, too. To find out all this, Mahua fools everyone and speaks standing behind Durga Mata's idol that 'tell the truth' so Ammaji feels that this is the real Durga Mata questioning her. And Ammaji tells the whole truth here and Mahua comes to know. Audience is going to love this sequence as the real truth will be revealed.

Chahat Pandey expressed her heartfelt gratitude to all her fans, all the viewers of Nath, that the show has crossed the 150 episode mark and new dramas and twists are being developed daily which is interesting for the audience.

Piomori, who plays the role of Janaki, said, "We are curious to know what Ammaji is hiding from all of us, so few ladies plan to let Ammaji reveal the truth. A big secret for the audience will be unveiled.

Pratima Kanan, who plays Amma ji, said that this sequence is such that some incident happened in her life 20 years ago. Mahua wants to know that reality from her, I do not tell this, but the women of the house together send Mahua behind the idol of Durga Maa and she speaks in the voice of Durga Maa. All the episodes of past play live in front of Ammaji and she tells the whole truth. The twist is increasing in the story of the show. On one hand, there is a threat to Shambhu's life, while on the other hand a strange girl named Tara has entered the house. That girl has come to this house to take her revenge.

Ammaji shared how 150 episodes of Nath serial have been completed. "I would like to thank the audience for this. The audience is appreciating this show a lot, giving a lot of love, the TRP of our show is increasing, all this has been possible because of the support of the audience. We hope to cross many more milestones," she said.

Nath Zewar Ya Zanjeer airs from Monday to Saturday 8 PM on Dangal TV.