Maja Ma encourages people to not be judgmental: Madhuri Dixit 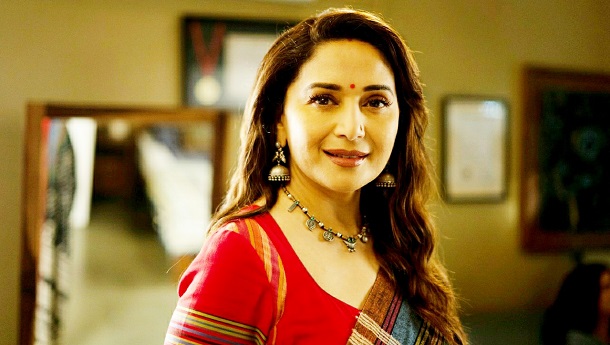 Madhuri Dixit-starrer Amazon Original Movie Maja Ma, premiered on Prime Video on 6th October, delighting audiences, and at the same time tugging at their heartstrings with its emotional moments. Furthermore, the underlying thought-provoking message in the film, makes one see various nuances of relationships from a new lens.

The narrative begins with a series of innocuous events that eventually lead up to the key protagonist, Pallavi Patel, played by Madhuri Dixit, unintentionally coming out of the closet, challenging societal norms and inadvertently jeopardizing her son's upcoming engagement. Even as her reality places her at crossroads with her family and puts all the relationships she had nurtured over the years with so much love and care in jeopardy, we see her stay strong to her convictions and true to herself and her own identity.

Excited about the response that the movie has been receiving, *Madhuri Dixit* shares, “Maja Ma proves that the era of boxing people and characters is over. Pallavi’s sexual orientation is just one of the many facets of her identity. She is much more than that – a brilliant dancer, a doting mother, a friend and above all, a human being who can inspire others around her. The storyline depicts a journey of evolution and Pallavi’s character showcases that journey with a myriad of emotions and feelings – ranging from confusion, fear, to acceptance and courage to accept one’s own true identity. This movie is about love, family and acceptance, but all of it is said without being preachy. In a way, Maja Ma encourages people to not be judgmental and embrace others for who they are.”

The unique narrative has been sensitively treated by the creators, who have worked closely with organizations including Yuvaa, Humsafar Trust, Umang, amongst others, right from the preliminary writing and conceptualization stage, through the making of the film, and even in the post-production phase, to ensure that their insights, sensitivities and sentiments have been considered. The Humsafar Trust, India's first community-based org for the LGBT community, gave a shout-out on its social handle to share their love and appreciation for the sensitive treatment of the subject. As mentioned in the tweet, they shared, “Maja Ma is a story of the perfect woman we all know & her emotional journey of dealing with sexuality whilst managing domino effect that it has on her loved ones Thank you Prime Video, Anand Tiwari and team for sensitively portraying this story.”

The CEO of Humsafar Trust, *Vivek Raj Anand* put up a post sharing his thoughts, post watching the film. He said, “Is a woman’s existence within her family her only identity? Pallavi is an aspirational mother, wife and a friend but is stigmatized and ruthlessly discriminated for a love that she forced herself to forsake to take on different roles that the society expected from her.

Watch the film for its sensitive portrayal of a woman who held another woman in her heart but never paused to think of her rights, or even her personal happiness within the frame of her marriage.”

For those who still have not watched Maja Ma, do watch the movie with your family and friends, because that’s what it is – a complete family entertainer that will envelop you with a feeling of warmth and joy, long after the end credits roll by.

Produced by Leo Media Collective and Amritpal Singh Bindra; directed by Anand Tiwari and written by Sumit Batheja, Maja Ma is a family entertainer, set against the celebratory backdrop of a traditional festival and a quintessential, colorful Indian wedding. Warm and funny, this light-hearted yet thought-provoking drama with unexpected twists and turns, features Madhuri Dixit in the lead, in a never-seen-before role. It boasts of an ensemble cast including Gajraj Rao, Ritwik Bhowmik, Barkha Singh, Srishti Shrivastava, Rajit Kapur, Sheeba Chadha, Simone Singh, Malhar Thakar and Ninad Kamat. Audiences in India and in more than 240 countries and territories can stream this highly-awaited Hindi Amazon Original movie on Prime Video.