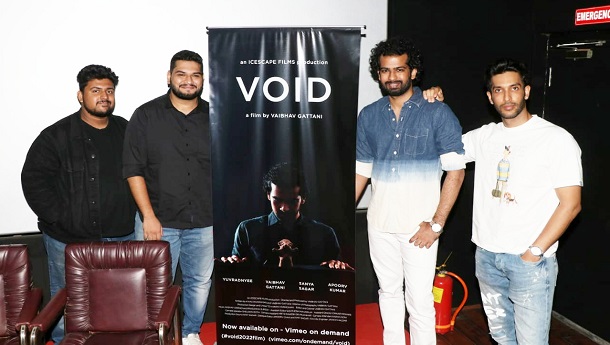 At a recently held press screening of VOID, filmmaker Vaibhav Gattani answered a volley of questions ranging from how relevant is the film in todays times of fast paced life, to whether the filmmaker subscribes to the fact that black magic is still prevalent in our modern age.

The 96 minutes feature film Void is about a married woman who in her pathological obsession to conceive through her own womb, she is willing to do anything and everything; even be witness to a fatal denouement. When medical science has no answer for Rhea’s infertility, she is left with no option but to go for Supernatural Interventions. Does she succeed? If yes then at what cost?

Produced under the banner of ICESCAPE FILMS, director of the film Vaibhav Gattani is also the producer, co-writer, DOP and editor of this slow burn film. Vaibhav also plays the character of the husband of the protagonist.

A brief storyline of the film is that Rhea is frustrated and depressed that she is unable to conceive through natural means. Abhijeet, her husband, does not seem to share her obsession for a child, though he suggests both assisted reproduction and adoption as alternatives. But she is not interested.

Instead this desperate woman seeks help from a Tantrik, much to her husband's disapproval and proceeds to resort to help from black magic. The climax reveals whether Rhea is able to achieve her goals, and at what cost?

"On surface the movie seems to be about Rhea’s journey to conception - to what extent she goes when she is not able to conceive a child! But the real movie is about the perplexities of human relation and behavior," Vaibhav Gattani revealed.

"Since all the characters and emotions are so natural, realistic and relatable, I chose to keep dialogues at the minimum to make the audience feel each and every emotion and let them decide what the characters are going through. As “Some things can only be felt and not told in words," observed the debutante director on an ending note.