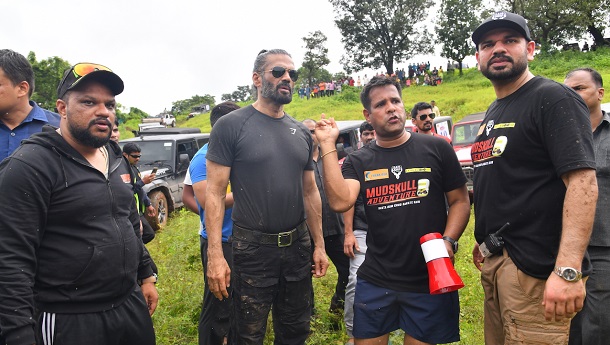 Pali, Mumbai 22th Aug 22: India's first thriller and Deadly Sports Mud Skull season three kicked off with a grand opening at Pali, Karjat, near Mumbai, in the presence of actor Suniel Shetty. Actor participated in the race from the start of the race to the final round on the first day in an adventure game that lasted for two days.

Mud Skull Off-Roading is now gaining its popularity among the audience. Fitness Icon, and Sportsperson, Suniel Shetty aka Anna is the brand ambassador of this sport. The founders of Mud Skull are Sam Khan, Subodh Singh and Ashish Singh. More than 200 riders participated in the third season of Mad Skull. The season started with Suniel Shetty in the open car along with Sam Khan, Subodh Singh and Ashish Singh.

On this occasion Suniel Shetty said, “Mud-skull off-roading is now a big sporting event and the sport of emerging New India. Like any other sport, people are engaging with Mud Skull Off Roading with enthusiasm and passion. The USP of this game is my most challenging tracks and locations.

Mud Skull is being held off-roading in Pali which is a beautiful location as well as a tourist destination for the success of this sports event. Although Mud Skull is a deadly sport, the joy of participating in this sport is beyond the limits of adventure as for safety, the track and terrain are prepared under the guidance of professionals. The fine cars are equipped with safety gear and technology. India is such a country which never lacks in terms of infrastructure and security.

Sam Khan, Subodh Singh and Ashish Singh, founders of Mud Skull, said that in the third season of Mud Skull, we have worked out a plan to actively participate in the professionals associated with the sport as well as their families. Season 3, even the family Involved along with their children, family members can drive on non-professional tracks and enjoy the pomp, music and entertainment. This season, several players as well as female riders were nominated. The two day Mud Skull Season 3 got an overwhelming response from the audience and the participants.