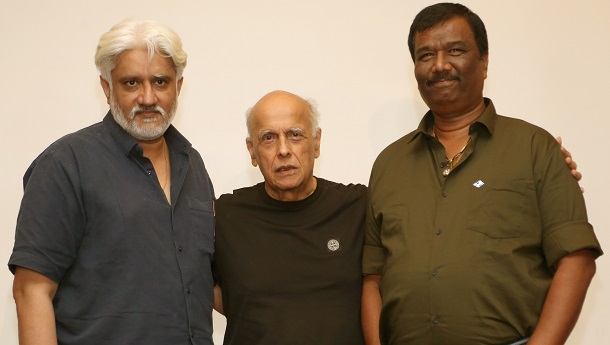 K Sera Sera and Vikram Bhatt join hands to change the dynamics of film making. Jointly they have opened India’s First Virtual Production Studio located at Dahisar Highway in Mumbai. This is spread in the area of 50,000 sq. ft and has 4 independent Floors to shoot 4 Films/ Projects at a time.

“Judaa Hoke Bhi” Film for us was a test of a technology and by Using the technology of virtual production i.e., with LEDs, we successfully managed to make the entire film on a floor of 60 X 60. The greatest victory for us is that ever since the film has been released last week and was shown to Millions of people worldwide, we are glad to announce that audiences have accepted visuals made from our virtual technology and the viewers have said that they found no difference between real and unreal in fact the virtual scenes have turned out to be better than real. Our victory is that what we made has been taken to the audience and has passed the test. JHKB was our R&D film; we now have a “Proof of Concept” says Vikram Bhatt

K Sera Sera and Vikram bhatt Studio virtual worlds are now a global market Company, Visuals made through our Virtual Film Technology are very cost effective, Grand and Equal to Hollywood Cinema. Now Bollywood film producers can become global after joining us and regional film makers will be able to make it big nationally. In simple words with Minimum investment we provide maximum visualisation, ie. If you invest 5 crores in any project, Our Studio Virtual Worlds will make it look like a 30 crore Project.

With our virtual production technology, we have decided to cater to not just Indian cinema but also to the world cinema because now we can match up to any film that is made anywhere. Therefore, we are not targeting the 6,000 or 7,000 cinema screens in India; we are targeting the 1.5 lakh screens in the world and 150 OTT / satellite platforms globally. We are keen to make our films in English, Hindi and even in Spanish languages so that we can reach audiences across the world. Now our films will not look inferior; they will not look like they needed more money because this technology of virtual production will give us the grandeur and the majestic images that we have always desired says Mr. Satish Panchariya Owner of K Sera Sera

This technology for a big film will allow filmmakers to save up to 40 to 50 per cent of the predetermined budget. And this would be desirable for every big project. However, this is not about “the big film”. This is about the films that wanted to look big but didn’t have the budget to do so. So, for a regional film which is being shot in Punjab but just wants to have five scenes in Australia or probably have the whole film shot in Australia, it is no longer necessary that the cast and crew travel to Australia. For the cost of shooting in Mumbai, you could shoot with this technology and make it look like Australia and complete all the action scenes and the songs. This means that virtual production is the ultimate equalizer. You will be able to get the grand visuals and the vastness which only the big films could afford till now. And that is why we invite everyone to share this technology; we want to service everyone. We want to tell the world that they can approach us and make their films look like they always wanted them to look: big and fabulous. We can do that for you, and this is the most important thing. So, we invite not only the Hindi film producers but we are also inviting the small producer, the big producer, the regional film producer to come and partake in this technology and help us to help them so that together we can become a strong industry says Filmmaker Mahesh Bhatt

With this technology, our entire Indian film industry can show its muscle to the world. We have always been looked upon as a country of millions who can make films but it has always been a certain kind of film, a certain budget we have not had the budget to make big films like “The Lord of the Rings”, “Star Wars” or “Avengers”. But with this latest technology, we have got it. We don’t have to look further. This is the beautiful part about it, that we can stand up as a virat swaroop to the world and say: “Here we are finally, standing shoulder to shoulder with world cinema.” Added Mr. Satish Panchariya.