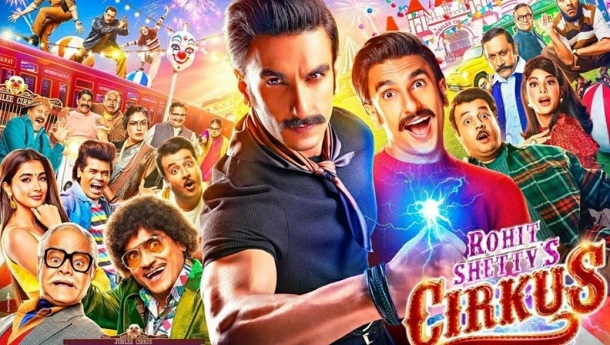 Director Rohit Shetty's Cirkus is a comedy-drama with a difference. Although this is a remake of the old Bollywood film Angoor, Rohit has cleverly linked the story to his hit Golmaal series and established this as a prequel to Golmaal.

The story belongs to two orphan twins, Roy and Joy. One of the trusties of that orphanage, Joy Jamnadas (Murli Sharma), exchanges these twins with each other for the purpose of proving that our upbringing is more important than a blood relation. That means when a couple adopts that twin, they get two different boys rather than a real brother. Ranveer Singh and Varun Sharma have played the roles of grownup Roy and Joy. Roy and both of the Joy brothers have the same appearance. Although these boys live in two different cities, they still feel a lot of heat for looking alike. Because of this confusion, lots of comedy has been created. Do they know about this exchange plan? What happens when confusion reaches its peak? To know all this, one must watch the film.

Although actors Ranveer Singh and Varun Sharma are in the lead roles and almost have parallel roles, actor Sanjay Mishra still has a greater influence in the film as far as performances are concerned. The comic scenario changes whenever Sanjay comes on screen. Apart from lead actors, actresses like Jacqueline Fernandez and Pooja Hegde have also made their presence felt. Other actors like Johny Lever, Mukesh Tiwari, Siddhartn Jaddhav, Radhika Bangia, Vrajesh Hirji, Tiku Talsania, Ashwini Kalsekar, etc. have also done justice to their parts.

In this comedy-period drama, music has played another important role. The music is quite impressive. Current Laga and Sun Zara are catchy songs that compel the audience to move their legs inside the cinema.

Overall, this is yet another comic masterpiece from director Rohit Shetty. So why wait? Go to your nearest movie theatre and watch it.