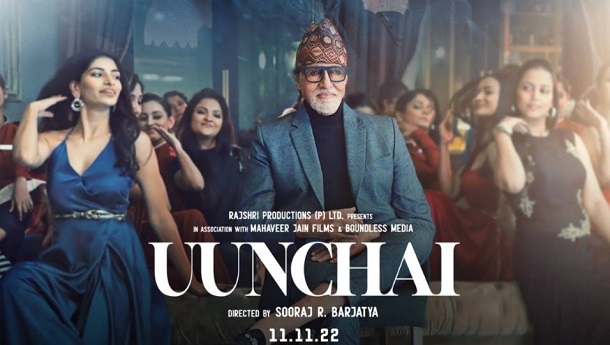 India's one of the most lovable production house, Rajshri, is back with another family entertainer, Uunchai. This time, director Sooraj Barjatya has tried to explore a new dimension in the bond of friendship.

Uunchai is the story of four friends, Amit Shrivastava (Amitabh Bachchan), Om Sharma (Anupam Kher), Javed Siddiqui (Boman Irani), and Bhupen (Danny), who live in Delhi city. Bhupen dies before he can fulfil his final wish of climbing Everest with his friends. Nonetheless, he purchased tickets for all four of his friends. Amit asks his other two friends, Om and Javed, if they can go on the Everest trip to spread Bhupen’s ashes so that, this way, they can give their last tribute to Bhupen’s almighty soul. All of these friends are senior citizens, with a variety of health issues that prevent them from climbing Mount Everest. Despite knowing their age and health issues, do they go to Mount Everest? Does Bhupen really get the real tribute that he deserves? To know the answers to all these questions, one must watch the film.

Apart from a good storyline, the music is another strength of the film. The melodious music of Amit Trivedi elevates the film to the next level. Songs like "Arre Oh Uncle" and "Haan Kar De" are quite impressive and entertaining.

Actors like Amitabh Bachchan, Anupam Kher, and Boman Irani are the real strengths of the film. The outstanding performance of Amitabh Bachchan gives a real boost to the film. Actresses such as Neena Gupta and Sarika, on the other hand, are a major draw for the film. Although Danny has played a small role in the film, still, he has done justice to his part. Apart from them, other artists have also justified their presence.

Overall, this is one of the finest movies of the year. As expected, this is another neat and clean movie from the house of Rajshri. So, why wait? Go and watch it in your nearest cinema hall with your family.