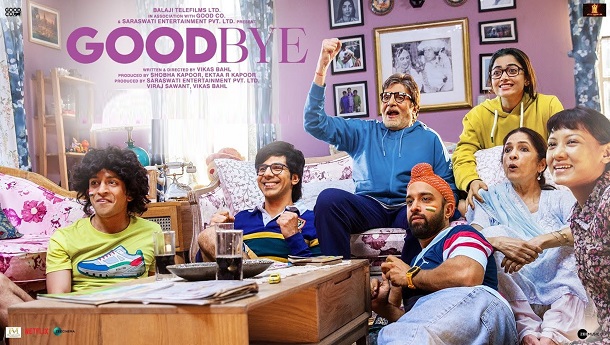 Recently, the two most discussed points in the film industry are the impact of OTT and South Indian films on Bollywood. These two points actually compelled industry people and trade analysts to find out why the Hindi film industry, or so-called Bollywood, failed at the box office in general. The biggest flaw in recent Bollywood films has been a lack of good content. Director Vikas Bahl's latest release, GoodBye, is one of the classic examples that proves that Bollywood is really exhausted on content or a good storyline.

The story revolves around a small-town retired citizen (Amitabh Bachchan) who suffers from not getting sufficient cooperation from his children in completing the post-death rituals of his wife Gayatri (Neena Gupta). His daughter Tara (Rashmika Mandanna) wished to do the cremation not as per the Hindu tradition but on the basis of her mother's liking. The elder son, who had to clear the hairs of his head as a part of rituals, doesn't do so because he feels ashamed of doing so. The other son is quite neutral and least bothered about things happening, and the youngest son, who didn't know about the death, came home very late. Do they realise the value of their family and rituals? Does everything happen as per rituals or do children do it in their own way? To know the answers to all these questions, one must watch the film.

Director Vikas Bahl has given outstanding films like "Queen" and "Super 30", so the expectations for his films are really high. The actors like Amitabh Bachchan, Neena Gupta, Rashmika Mandanna, and Sunil Grover, etc. have justified their roles in the film, but the poor storyline and loose direction have led the movie into bad shape. The first half seems a little interesting, but the second half is quite dull and boring.

The only strengths of the film are its good star cast and music. The melodious music of Amit Trivedi touches the hearts of the audience. Songs like Laga mujhe hic hic, Chann Pardesi, and Jaikal Mahakal are quite impressive.

The movie fails to impress the audience for various reasons, like 1.) Poor storyline 2.) A sloppy screenplay and dialogue 3.) Underutilization of megastar Amitabh Bachchan's talents 4.) The film's unwanted length 5.) Inappropriate dialogue and conversation between a father and son 6.) Excessive humour in a death scene 7.) Children who strongly believe in modern culture, such as live-in relationships, inter-religious marriages, and so on, are easily persuaded by the climax and begin following Indian culture and traditions 8.) fails to give a strong message to the audience as expected.