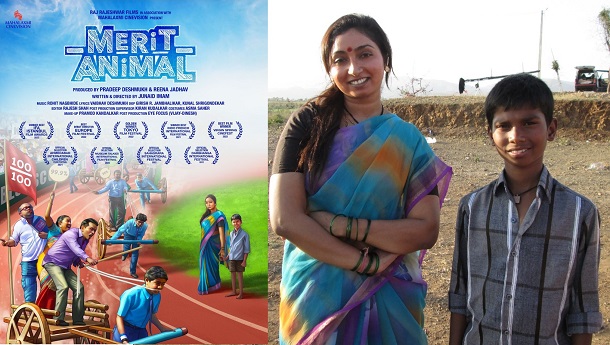 Director Junaid Imam’s Merit Animal is one of the finest social drama film based on the ongoing corruption in the Indian education system that leads a child to different traumas and sometimes it meets with disastrous results.

The story evolves around a child, Varun Sharma (Aditya Singhal), who takes part in a cycling competition organised on the outskirts of the city on a hillside. Varun, who is 16 years old, meets an accident and goes missing in that jungle. His body was later found on the other side of a rustic community devoid of any evidence of contemporary technology. In the village of Gunapur, Meera (age 30) and Mohandas, an impoverished couple, spotted Varun. Varun tells them as soon as he regains consciousness that he has no memory of himself. The village chief advises Varun to stay put for a few days and send someone to the adjacent metropolis. Muniya is a highly mischievous youngster who belongs to Mohandas and Meera. Varun is brought along by Muniya and is included in all of his antics. For Varun, this was all very unfamiliar. Varun views requests to take part in plays as invitations to compete. All of the other kids start to keep their distance from him as a result of this tactic. His parents want Varun to achieve the highest possible scores across the board. Do Varun's parents get him back? Does he really wish to go back to his past life where he always felt he was treated like an animal for being in the merit? One must watch the film to find the answers to all these questions.

The film's plot focuses on a pressing issue facing society. To achieve our personal goals, we put pressure on our kids to perform at their highest level, which is stressful for them. Everyone wants to win this race, but in the process they often forget about their young children. Through this film, we attempted to expose the hypocritical dual nature of the educational system. The movie Merit Animal serves as an eye-opener for our culture.

Child artist Nangesh Naik is the centre of attraction in the film. As a village boy, he has performed so nicely that the audience can feel the essence of India’s rural life. Aditya Singhal, another child actor, also impressed the audience with his innocent appearance and strong performance. Actress Reena Jadhav has done an outstanding job in this film. Her acting is quite natural and she has impressed the audience with her performance. Apart from them, other actors like Mahesh Ghag, Bahar ul Islam, Bhagyarati Bai Kadam, etc., have also done justice to their parts.

Overall, this is a brilliant idea, beautifully conceptualised and executed by director Junaid Imam. Although the film does not have any commercial angle that can draw an audience to the cinema hall, the decision to release it on OTT is brilliant and one must watch it to understand the ongoing problems and pains of our school-going children whom we as parent mostly ignore. So, it would be recommended to watch at least once.