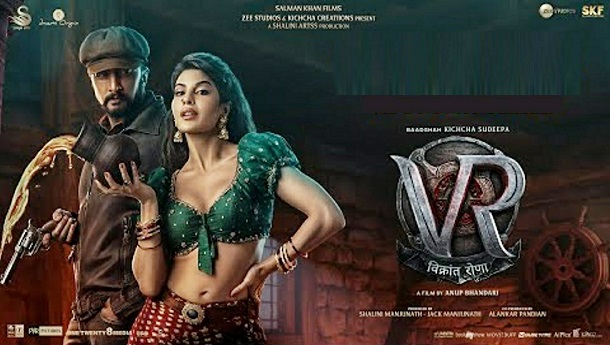 Vikrant Rona, directed by Anup Bhandari, is a brilliantly made movie. Almost everything, from special effects to fight sequences to background score, lives up to expectations, with the exception of the storyline, which is fairly standard. Kichcha Sudeepa is the centre of attraction in the film, and he holds the attention of the audience till end.

The story revolves around Vikrant Rona (Kichcha Sudeepa), who is a police officer who gets a transfer to a tribal area far away from the city limit. From the first day he arrives at this police station and the surrounding areas, he notices anything out of the ordinary. Villagers and local police staff tell him the story of the spirits and ghosts active in the area. Once, he gets badly stuck in that jungle and haunted area and unfortunately loses his nearly 10-year-old daughter. Was it really an act of spirits and supernatural powers, or was there someone else involved in it? The real crux of the story is the climax, so one must watch the film to find out what happens at the end.

Kichcha Sudeepa’s performance is highly appreciable, but it is mostly noted that his acting seems to be a carbon copy of Bollywood actor Salman Khan in many of the scenes. Overall, he has justified his part. Apart from Kichcha, other artists like Nirup Bhandari, Neetha Ashok, Jacqueline Fernandez, Ravishankar Gowda, Madhusudan Rao, Vasuki Vaibhav, etc., have also done justice to their parts. Jacqueline Fernandez has a small role to play, but she has impressed the audience with her latke-jhatke.

Although music doesn’t play a major role in the film, the songs are still good. B Ajneesh Loknath’s music is quite impressive. Ra Ra Rakkamma and Hey Fakira enhances the beauty of the film.

Overall, this is an above-average film. The technical aspects are highly appreciable and, other than that, Kichcha Sudeepa’s acting is quite impressive, so it would be recommended to watch it at least once. So, why wait? Go and watch it in your nearest cinema hall.