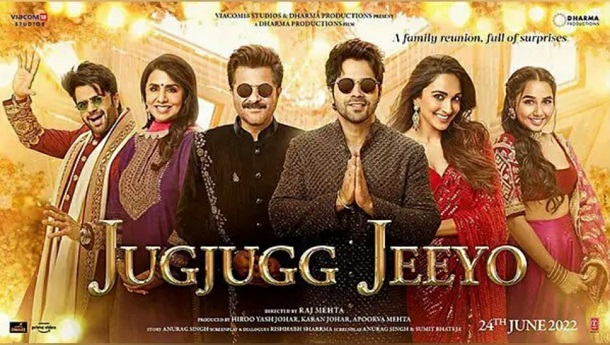 The story revolves around a young married couple, Kuldeep Saini, aka Kukoo (Varun Dhawan) and Naina Sharma (Kiara Advani). Naina gets a job offer from abroad, so even Kukoo had to go with her, where he also starts working as a bouncer/bodyguard. They usually fight with each other for the smallest possible reasons, so one day they mutually decide to get a divorce, but since there was a wedding of Kukoo's younger sister, they decide to hold their decision to divorce till then. They come to their hometown in Panjab, and Kukoo tries to share his decision to divorce with his parents, but whatever happens there in the family is the real crux of the story. One must watch the film to know what happens at the end.

Varun Dhawan and Anil Kapoor are the centre of attraction in the film. Versatile actor Anil Kapoor has impressed the audience with his mind-blowing performance. On the other hand, actresses Kiara Advani and Neetu Kapoor have also impressed the audience with their outstanding performances. Although artists like Manish Paul, Prajakta Koli, and Tisca Chopra have smaller roles, they have still justified their parts nicely.

Apart from the storyline, the music is another attraction of the film. The music composer Taniahk Bagchi's famous "Punjabban" song is the real attraction of the movie. Even the other songs in the film are also quite entertaining.

Overall, we can say this is one of the finest movies of the year. It's quite entertaining and gives a strong message to our joint Indian families. So, why wait? Go and watch it in your nearest cinema hall.