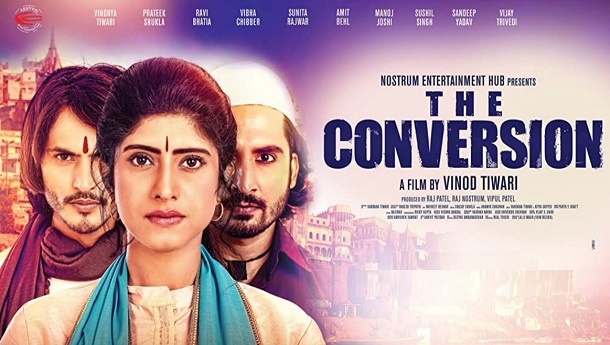 The Conversion, directed by Vinod Tiwari, is one of the most eye-opening movie of the year. The movie talks about the conversion of Hindu girls through an organised and well-planned mission known as 'love jihad'.

The story revolves around a college-going boy, Babloo Shaikh (Prateek Shukla), who is popularly known and called as Babloo only and never reveals his surname. In the college, he follows a Hindu Brahmin girl, Sakshi Mishra (Vindhya Tiwari), and tries to impress her with his knowledge of Bhagwadgita and the ideology of Swami Vivekanand. After many attempts by Babloo, Sakshi finally falls in love with him and thus both plans to marry. She tries to convince her father (Manoj Joshi) but he doesn't agree, so Babloo suggests Sakshi for a court marriage. A twist comes in her life when, for the first time, Sakshi comes to know about Babloo's being a Muslim boy, just before her marriage in court. She denies for the marriage and feels cheated. Nonetheless, after a few twists and turns, Babloo persuades her to marry and allows her to continue to follow Hindu traditions and culture even after marriage. Finally, Sakshi goes against the will of her parents and marries Babloo. Whatever happens after this inter-religion marriage is the real crux of the story. Does everything go well with Sakshi? Does Babloo continue his love for Sakshi? Was this unmatched marriage successful? To know the answers to all these questions, one must watch this film.

Although music does not play any major role in this movie, still, the music by Anamik Chauhan is quite impressive.

The writers, Vandana Tiwari and Rakesh Tripathi, have penned down a brilliant piece of work and tried their level best to balance the story.

Actress Vindhya Tiwari is the centre of attraction in the film. She has impressed the audience with her mind-blowing performance. The actual charisma of her acting brilliance can be seen post intermission. On the other side, the supremely talented Manoj Joshi is another attraction of the film. Lead actor Prateek Shukla has beautifully done justice to his part. Apart from them, other artists like Vibha Chibber, Ravi Bhatia, Amit Bahl, Sunita Rajwar, Sandeep Yadav, Sushil Singh, etc., have also done justice to their roles.

Overall, this is one of the brilliant piece of research work honestly served to the audience in a balancing manner by director Vinod Tiwari. This is nothing against any caste or religion, but it exposes certain types of people who carry out such an agenda to exploit the harmony of India. So why wait? Go and watch it in your nearest cinema hall.