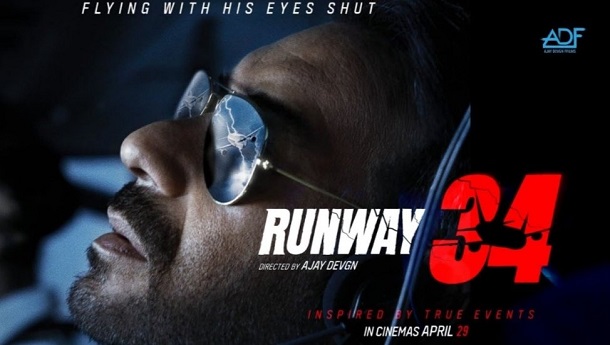 Runway 34 is one of the finest thriller movie of the year. This is produced and directed by Ajay Devgn.

The story revolves around captain Vikrant Khanna (Ajay Devgn), who, along with his co-pilot Tanya Albuquerque (Rakul Preet Singh), finds himself in a situation where he has no choice but to take the wrong direction to land the flight carrying 150 passengers. Due to his wrong decision, he had to face challenges from the higher authorities. His case is personally handled by Narayan Vedant (Amitabh Bachchan), who is known for his strict actions and investigations. The climax is the real crux of the story, so one must watch the film to know what happens at the end.

Ajay Devgn is the centre of attraction in the film. He has impressed the audience with his outstanding performance. Apart from him, gorgeous Rakul Preet Singh and megastar Amitabh Bachchan are also in pivotal roles that impressed the audience with their mind-blowing performances. Other artists like Boman Irani, Aakanksha Singh, Angira Dhar, etc., have also justified their parts in the film.

The first half is quite thrilling. It engages the audience with suspense and thrills. In the first half of the film, Ajay Devgn and Rakul Preet Singh share the majority of the screen time. On the other hand, the second half is centrally controlled by Amitabh Bachchan. He has played the role of a powerful officer who conducts the enquiry and reaches a conclusion.

Overall, this is one of the finest thriller movie. It's quite engaging and compels the audience not to remove their eyes and attention from the screen. The charisma of Ajay Devgn's direction can be easily seen here. So, why wait? Go and watch it in your nearest cinema hall.