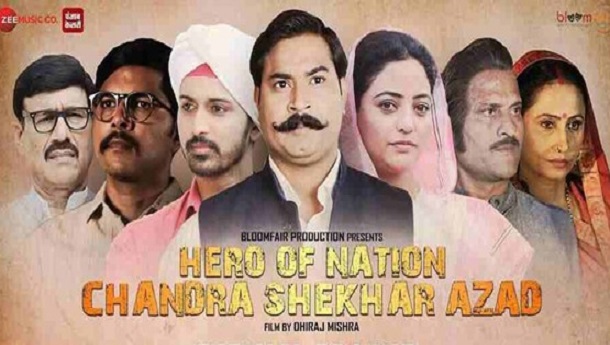 Time to time Bollywood producers and directors have made the film on our greatest patriot and martyr Chandra Shekhar Azad but this time, directors Dhiraj Mishra and Raja Randeep Giri have come up with a unique experiment on the story of legend Azad through their film-“Hero of Nation Chandra Shekhar Azad”

Story revolves around Chandra Shekhar Azad (Ahmad Kabir Shadan), the great freedom fighter who creates a group of youngsters to fight with British govt. Azad’s father Sitaram Tiwari (Raza Murad) and mother Jagraani Devi (Zarina Wahab) wanted to give a higher education to their son but Azad never had any interest in studies. He was always inclined towards freedom movement. Azad meets many other great patriots of the country like Sukhdev, Rajguru and Bhagat Singh and challenges the British Govt. Since the story is part of our great Indian history so need not to discuss about the climax or the things happened with Azad. Since directors have used their own unique way of making this film that’s why film is little different from the other movies made on Azad so far.

Actors like Ahmad Kabir Shadan, Raza Murad and Zarina Wahab are the real attraction of the film. They have impressed the audience with their mind-blowing performances. Other artists like Riitu Sood, Pradeep Kabra, Vivek Anand Mishra and Kavita Thakur have also justified their parts in the film.

Except Raza Murad and Zarina Wahab, other artists are lesser known so; film is not upto the expectations of today's multiplex audience. Due to low budget, film could not meet the advanced technical requirements. Songs and background music are not upto the mark but still directors have tried their level best to serve a reasonably good product to the indian audience. It's a nice attempt.

Overall, every artists have done a good job and tried their level best to impress the audience. Although it’s a known story of our greatest martyr Chandra Shekhar Azad but still audience must watch the film to recall the greatest work of Azad. The charisma of Dhiraj Mishra and Raja Randeep Giri’s direction can be seen here so it can be recommended to watch at least once.