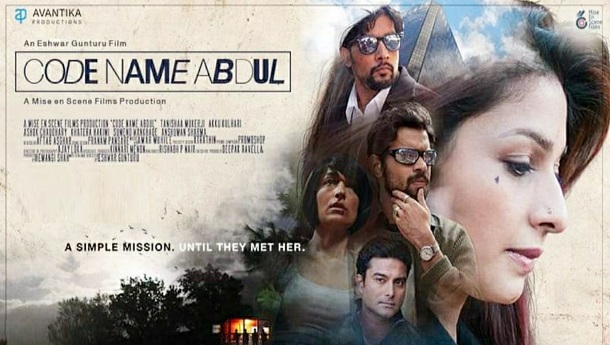 Director Eshwar Gunturu's 'Code Name Abdul' is one of the predictably unpredictable movie of the year. A movie that seems to be predictable almost till end, takes U turn and changed the entire perception and predictions of the viewers.

Story revolves around an ISI agent (Tanishaa Mukerji) who was taken to a secret place somewhere in New York by 4 RAW agents for interrogation. They try to know about a Pakistani mastermind Tariq who was indulged in spreading terrorism in India. Through her interrogation, RAW wanted to get Tariq's diary because all the secret plans and the name of people working for him are mentioned in that diary. Does she open up her mouth? Do they get to know about Tariq or his diary? Is she really a right person for these RAW agents? This movie beautifully answers all these questions. Climax is the real crux of the story so; one must watch the movie to know what happens at the end.

First half is quite slow but second half is slightly interesting because when story leads towards climax, it actually engages audiance and increases the curiosity. Tanishaa Mukerji is the centre of attraction in the film. Her performance is highly appreciable but somewhere it seems that she could have done better. Apart from Tanishaa, other artists like Khatera Hakimi, Sumend Wankhade, Ashok Chaudhry, Akku Kulhari and Anshuman Sharma have also justified their parts.

Ajay Loka's cinematography is really appreciable. New York city is beautifully captured by him. Despite having a poor storyline, director Eshwar Gunturu have tried his level best to give a finest climax to the film. His magic of direction can be seen in the later part of the movie.

Although there is no much scope for music in this spy thriller movie but still, Amar Mohile's music is quite impressive.