My would-be husband should be a good human being: Elli AvrRam 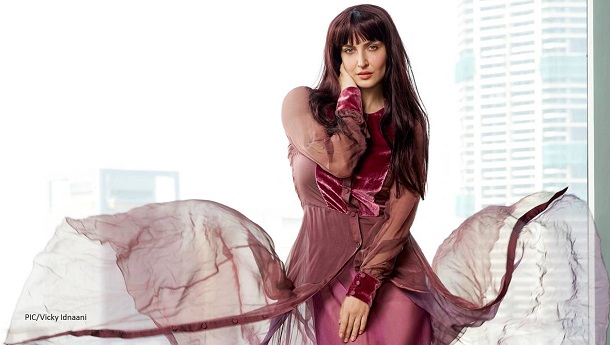 Elli AvrRam is a Swedish-Greek actress who realised the power of Bollywood movies ever since her childhood, when she watched SLB’s Devdas on TV at her home in Sweden. Bollywood actually compelled her to come to India to make her acting career. Since the last decade, she has earned lots of love and appreciation in the Indian film industry. In an exclusive interview with Yogesh Mishra, she spoke about her childhood days, favourite Bollywood actor, marriage plan, future projects, and more.

You came to India to make your career in Bollywood. Why is Bollywood the only career option?

I've answered this question in many of my previous interviews. I've been a fan of Bollywood since I was a child. At my home in Sweden, a Bollywood song was coming on TV, and that song was so nice that I just loved it. I loved the kind of colourful dresses the girls wore in that song and the kind of energy level the actors had. When I asked my family about that song, they told me that this is an Indian film industry called Bollywood. Since then, India has made a space in my heart, and I started thinking that, yes, this is the country I need to go to.

Who is your Bollywood celebrity crush?

Shah Rukh Khan. Actually, the first Bollywood film that I saw in my childhood was Devdas. There was a Swedish TV channel running one Bollywood movie every day for a week. We also used to watch a popular Indian comedy show with our families. After watching Devdas, I loved the movie so much and became a fan of Shah Rukh Khan, Aishwarya Rai Bachchan, and Madhuri Ji.

You are a huge fan of Sanjay Leela Bhansali's Devdas. So, after coming to India, did you ever meet Bhansali?

Yes, I've met Bhansali sir at a party and events. I came to Bollywood because of Devdas. Although I could not talk much because I was so happy and nervous to see him, I could just manage to say hello!

Did you express your desire to work with him?

No. I am so shy that I could not say anything.

Did you tell this story to Shah Rukh Khan about Devdas and your liking for him?

Yes. I told him how big a fan I am and that Devdas was my first Bollywood film. So yes, I expressed my emotions, and he gave me an amazing and cool answer that I still remember and wont share it with anyone as of now.

How did you get your first acting assignment in Bollywood?

I had done a catalogue shoot for a very big brand with a photographer named Jeetu Savlani. I always remember his name because he was the sole reason I got my first catalogue shoot job here. Jeetu asked me if I wished to do modelling only or was interested in acting too. I told him that I wished to do acting. He promised me that if anything came up, he would connect with me. After three months, he called me and told me that there was a requirement for an actress for an NRI role. He gave me the name of the filmmaker, Saurabh Varma. I gave the audition and finally got selected as the heroine in Mickey Virus.

You have recently worked with the superstar of the millennium, Amitabh Bachchan, in "Goodbye." How was your working experience with him?

I couldn't believe I’ll be working with the legendary Amitabh Ji. Seriously, I still cannot digest that I have worked with sir. It’s my pleasure to get to do that. He is an amazing person and very professional. He has a good sense of humour, I must say.

What is more important to you, India or Bollywood?

Bollywood of-course. Bollywood is my childhood love and dream and it was connected to India. For me, I think Bollywood and India are the same. Everything in India was exciting for me. Whatever I have seen in the movies about India, be it cows, rickshaws or the yummy laddoo, everything was very colourful. I was always so curious about this country. Whatever is shown in the movie about Indian culture and traditions actually attracts me more. India is now my country too because I have spent a decade here. Throughout my Bollywood journey here, I learned a lot of Indian traditions and values as well.

Which Indian tradition or festival do you like the most?

One festival that is so much fun is Holi. I have played it and enjoyed it. If you know the story behind the Holi celebration, it is beautiful. You can enjoy it more when you understand why this is celebrated. I think every festival in India that we celebrate has a very deep story behind it. There is a deeper message behind it. It was my mom who used to share these stories with me. She loves Indian mythologies, and she has read the Mahabharata. She used to send me messages about the stories behind the celebration of these festivals, which I enjoyed and loved reading. There is much knowledge here in India that I have discovered that is all connected to our lives and connected to what life is all about.

What should the qualities of your would-be husband be? He should be an Indian or from somewhere else.

Do you have someone in your life like that?

I have two cats (pets). These are two Desi boys (laughs) (showing cats). I have adopted them.

Marriages are considered the relationship of the next seven births in India. Do you believe in such ancient Indian customs?

Even in Greek culture, it's like that. My family wants to know when I am going to marry. My mom asks when she will play with her grandchildren.

So, when are you going to marry?

I could have become a sadhvi (a nun) as well (laughs). I really don’t know when.

There must be lots of people looking at you. Is it?

Absolutely, but I should also be looking for somebody. Right?

What are your current and future projects?

I am currently working in Ganapath. I am playing the second lead role and cannot disclose much about my role. The shooting of one song is pending. There are a few more exciting projects that I will announce soon.

Just be happy and enjoy life.