I am an over thinker: Elli AvrRam 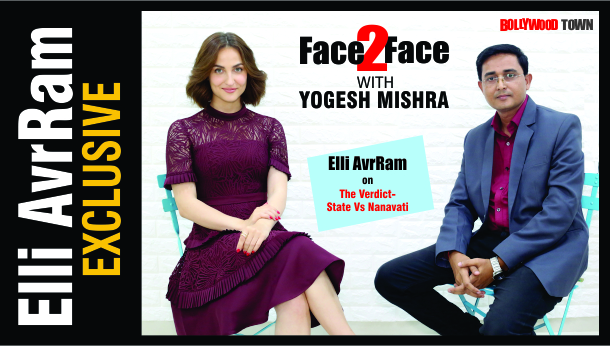 How did you get the entry in the web series ‘The Verdict- State vs Nanavati’?

I got approach for it. They were very clear with the things that they wanted to cast a foreigner for the role because Mrs Nanavati was a British. She was a foreigner. So, I was very excited because I was aware of this case. I knew about her actually. I auditioned for it. I thank Ekta Kapoor for putting her faith and believe in me and allowing me to play the role of Sylvia.

What exactly inspired you to say yes to this role/script?

Producer play very important role in casting lead actors. How much Ekta Kapoor was involved in casting you for this role?

I believe, of-course it was director Shashank Shah and even Subhash Kapoor's call when it came to the casting but then obviously Ekta will also have to say okay. By end of the day it's a call that everyone takes together. Therefore, I'm extremely grateful to three of them in believing in me after seeing my audition and giving me this opportunity because for me it's a dream role.

How different is this from a 70mm screen to a small screen like a web series?

It's not much of difference actually. I would say, pretty much the same job. It's about your character, get into your character and then give your best.

I was overwhelmed when I performed my big scene in the court room and after my first take everyone suddenly stood up and gave standing ovation. It’s the best feeling I’ve ever felt as an actor and something I’ll always remember.

Web series are currently doing very well. In-fact it's going to the next level. Do you think digital platforms like web series can replace movies?

I really feel that it's becoming the future. I think, the trend of watching movies in cinema hall is becoming lesser which is something that I do not wish for.

Did you know the story in advance about Nanavati case before you get into this venture?

Yes. I knew the basic story but after reading our script there were so much that I get to know about this, which I did not know earlier.

This is based on a true story so were there your own research work on this?

Yes. Whatever I could found on internet about the Sylvia and about that case I read that. It's not so much on the net. I prepared myself to get into that character.

How was your working experience with your co-actor Manav Kaul?

I have very beautiful working experience with him. He is such a wonderful actor and even I learned from him, how he act, how he acted together and what we manage to create together. There was really a beautiful journey. He is very funny actually. The movies that I have seen of Manav, I have always known him in negative characters. But he is completely opposite to this. He is so much fun, so much loving and really kind. It had a beautiful journey working with him.

The trailer is doing good and your role is highly appreciated, so what are your expectations from this web series?

I wish, it leads to more meaty roles where I get to perform as an actress. I would like to do more such roles which are performance oriented.

Any secret that people don't know about you?

I'm an over thinker

What makes you angry?

Who is your favorite Bollywood actor?

Who is your favorite Bollywood actress?