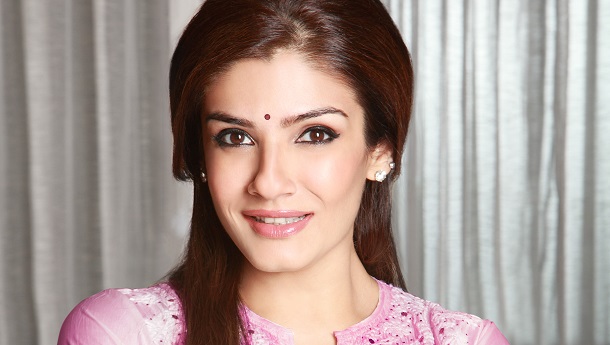 Bollywood’s mast-mast girl Raveena Tandon started her career with a hit movie ‘Patthar Ke Phool’ in 1991 and since then she never looked back. She has given many blockbuster movies like- ‘Mohra’, ‘Dilwale’, ‘Laadla’, ‘Khiladiyon Ka Khiladi’, ‘Ghulam-E-Mustafa’ & ‘Bade Miyan Chote Miyan’ etc. She has won the National Film Award for Best Actress for her performance in ‘Daman : A Victim of Marital Violence’, where she played a battered wife to an abusive husband. She was last seen in the thriller movie ‘Maatr’(2017) in which she played a mother who takes revenge for her daughter's rape. Although now she is not much active in Bollywood yet she is the heartthrob of millions. In an exclusive interview with Yogesh Mishra, she spoke about her favourite actor, dream destination, view point on #MeToo campaign, future plans and more…

I’m quite optimistic, have the knack of creativity and self-expressive.

It wasn’t pre-decided but I have always been a performer in school and college days. Right after my second year at College, I got my first film offer from Shantanu Sheorey and I went ahead with my instinct and accepted it. After that it was never looking back.

You made a successful debut in Bollywood with ‘Patthar Ke Phool’. Can you share any memorable incident of those days?

Oh you are talking about things that happened more than two decades ago. There were lot of memorable incidents, not particularly one that I can think of now but working with Salman and such acclaimed directors and producers of that time is a memory in itself.

More of persistent based rather than inborn talent. However, these artistic abilities can only be enhanced through discipline and commitment and you get mature as each film teaches you a lot as an actor.

Tough one! I think it will always be my first co-star Salman Khan.

You have won several awards for your acting. Any specific award that you still wish to win?

I guess it would be great if I could win an award for a comic role.

Gratitude! I always look around for blessings and positivity. It can be as small as having my meals or to be able to have a house of my own. I have my family besides me, so when you count your blessings you suddenly feel you have abundant in your life.

There are lot of places I have travelled and there are couple of more that I wish to see during my life time. I like oceans, so I would definitely like to visit Seychelles soon for its breath-taking oceanic views.

What attracts you more? Money, beauty or intelligence?

Doesn’t everything go hand in hand? I mean everything has its place in life and striking a balance between all the three is the key.

Can you define beauty in your own words?

Happiness! When you are happy from within it shows on your skin.

Recently many Bollywood actresses shared their #MeToo stories. Do you feel Bollywood is a safe place for female artists?

I guess I have already shared my thoughts on this subject recently, though I personally haven’t faced anything per say but salute the courage of those who came out and spoke about it.

Do you think #MeToo campaign is going in right direction? If yes then do you feel this campaign is strong enough to give justice to the women against sexual harassment?

Only time can tell whether it’s going in the right direction or not but I’m glad the movement has started and decisions are already made for/against as you read these days.

Do you think #MeToo campaign can be misused? Can it also be used as one of the tool to take revenge?

Yes, of course. As you can already see in the midst of all the stories coming out, to find the authenticity is a task in itself.

You will see that in future itself as I don’t plan anything in advance. I go as it comes and what feels right for me at that point and time.