There is no better time than now: Vinay Sapru 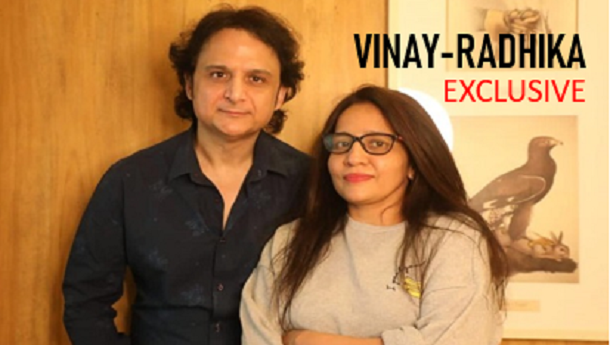 Vinay Sapru and Radhika Rao started their journey long back in the Indian music industry. They are the only directors who have directed and produced songs and videos with practically every musical legend of the country, from Nusrat Fateh Ali Khan, Lata Mangeshkar, Asha Bhonsle and Jagjit Singh to the current heartthrobs Arijit Singh, Neha Kakkar and many more. In an exclusive interview with Yogesh Mishra, they shared about their journey as a music director, future plans and more…

It's a very rare when a male, pairs with a female for creating music. What is your story?

Even I thought that the male is superior one, till I met Radhika Ma'am. It all started 20 years back, I was directing short films, ad films and then I met Radhika. I realised in every story you have to tell, you have that element of originality, and the story you want to tell. I always wanted certain kind of stories, when I met Radhika, I actually discovered this is the kind of stories that I want. From there Radhika and I started the world of fairy tales that we have got now. That's the reason that our partnership lasted over two decades, because it's the same stories that both of us like to tell, the same locations both of us like, the same kind of artists that we like. This is the reason where our partnership has survived because I always knew what kind of stories I need to tell, but actually Radhika defined it and that's the reason our career is so successful.

Which were your first song or project you did together?

We use to do short films with various corporates. Our first song that we did, the musical journey we took together was with Nusrat Fateh Ali Khan’s ‘Kinna Sona'. At that time, we were new to this profession. Though Nusrat Sahab was a legend at that time, but we didn't realise that he is the kind of legend we are working with. Now when we look back, we say that we started our career with Nusrat Fateh Ali Khan the legend that he was. It was always our world of fairy tales, in that song we were looking out for the story of a perfect man that god would have created. Nusrat Sahab lyrics went very well Kinna Sona Rab Ne Tuje Banaya, Dil Kare Dekhta Rahu. We did auditions and then we met Arjun Rampal. We introduced him, that was his first song. We finalized the casting and then we saw Arjun, he was the perfect man great chiseled body. He was not a He-Man muscular body, it was an absolute how Adam Of The Eve would have been made by the god, with lean face, body, tall and that was our version and beginning of our fairy tale with Kinna Sona which was our first song.

You have created music for many legendary singers too. How were your working experience with them?

When you work in an environment, where you know they are legend. But Radhika and because we have started very early in our career. Infact, our first song with Nusrat Fateh Ali Khan, we started our career with legends and we were so young that we didn't realize that we are working with a legend. We worked in natural temperament, the way we are, the same way we use to be with legend. Its quite became boon for us, because we never carried a baggage of no it is Asha Ji, Lata Ji or Jagjit Ji, so we can't do this. When we get a sound, we say I want to do Nusrat Fateh Ali Khan, I want to do Arjun Rampal. I think we get great cross cultured relationship of white boy and an Indian desi girl falling in love. We never traditionally done on legend songs or Asha Ji's song, they were just coming in our mind, that was what instrumental in our whole journey with the legend and they also appreciated it. Therefore, we have these great songs with the legends we worked with.

You have introduced some new artists as well. Any comment?

We have worked with new artists more than the legends. It has always been more satisfying and gratifying because they don't have any fanbase or image. It's a complete painting, that we are painting on a blank canvas. When we picked up Falguni Pathak as a singer, she used to do Dandiya gitz at the suburbs of Bombay. We did a first song 'Yaad Piya Ki Aane Lagi', and we decided that we will make this song that are appealing to you in a college environment. The good thing is that new commers surrender to you completely and that’s where you excel and give your best.

You have over two decades of experience in music industry. What are the difference between those days and now.?

I think it's pretty much the same - the music is the same the passion is the same I still remember working with Asha ji was the toughest song that we have ever shot. She used to ask for a song a week in advance and prepare for a dub, come for the dub and she used to slum it out during video shoot also. Where not we have taken her from Bombay till Kathmandu till pokhra it was as much as that to the one which we did with Dhvani Bhanushali. I guess the passion towards singing it's pretty much same and both the generation are delight to work.

Technological advancement has changed the world of music. What is your comment on this?

Ya it's changed. I'm must say we should not be judgmental about it as the world is moving on as the technology is moving on everything is changing. at that time, it was good what we had that time, we used to have this elaborate studio for recordings but now a days everybody's home has got recording studio. every composer, every singer has got recording studio at their home so it has become so compact and the software is available at everybody's houses. That kind of environment used to throw different kind of creativity and this kind of environment gives different kind of creativity because on your finger tip you have got world's best available tool.  That era of Creativity used to bring out different kind of thoughts I must say Fursat se aate the thoughts and now we are expose to much more information so we get this kind of thoughts. so both had their own pluses and minuses

Any message for upcoming music arrangers/directors?

One message only there is no better time than now for independent composer music riser tiles singers because right now the world is available to everyone and everyone can reach the world at the click of finger-tip even the audience today doesn't want to listen to these big Bollywood sound track where 150 dancers are dancing and the most good looking super star is singing the song. Today audience wants to listen great music and they want to see who the composer is who the singer is they want to see touch and feel. So our message to the audience is that there is no better time than this so go back home don't copy anybody bring out that original thought, sing original song that you have got and you will hit the top.