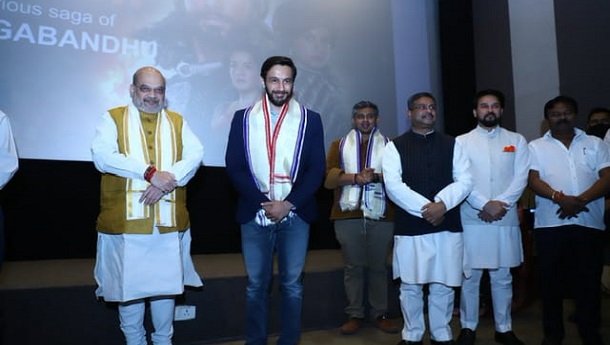 British-Indian actor Danny Sura was honoured by Amit Shah for his role of Jeffrey Fletcher from Vidrohi. The event was organized by Odia Samaj in recognition of bringing the true story of India's first Rebellion against The East India Company. The popular television show was screened for the attendees.

Talking about the experience Danny Sura said, “This is something which I have never experienced before and I was very excited about attending the event. To be recognised by the ministry of India for my role as Jeffery Fletcher is a great achievement for me and something that I am very proud of.”

He further added, “A lot of attendees which also included other ministers did mention that Jeffrey Fletcher was their favourite character from the show. This just goes to show that it doesn’t matter if a character is the hero or the villain as long as the audiences can connect with that character. It was an honour to be present for the event alongside my co-star Sharad Malhotra, Sulagna Panigrahi, Hemal Ingle, and Subrat Sinha (Producer of the show)."

The event was held at the Films Division, Ministry of I & B Government of India in Delhi.

Danny Sura is known for his projects like 'Girl in the City', 'Bose: Dead/Alive', Vidrohi, and '21 Sarfarosh: Saragarhi 1897'. Danny’s slate looks interesting with his next feature film with Tannishtha Chatterjee ‘Rani Rani Rani’. Also, his first international film called ‘Footprints on Water’ with Adil Hussain which is due for release this year.