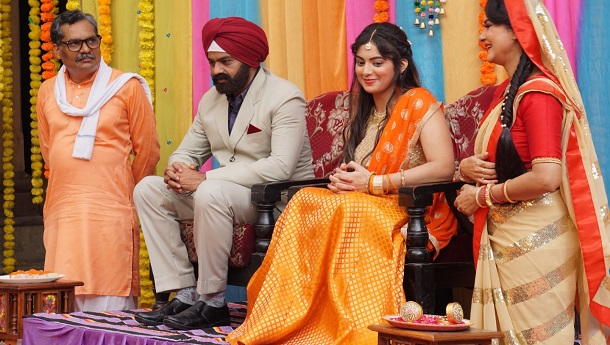 In &TV’s Ghar Ek Mandir-Kripa Agrasen Maharaja Ki, Genda Agarwal (Shrenu Parikh) is upset with her husband Varun (Akshay Mhatre). But, when Genda finds Varun is working late at the shop, she steps out to give him food. However, this results in Varun scolding her for stepping out of home late at night and he gets an attack. Genda gives him medicines and puts him to sleep. To ensure that her husband’s work is not affected, Genda finishes the jewellary sets. This makes Varun realise his mistake. How will he make it up to Genda? Akshay Mhatre as Varun Agarwal from &TV’s Ghar Ek Mandir-Kripa Agrasen Maharaja Ki says, “Varun strongly believes that women should always follow the orders of the men of the house, so whenever Genda does anything out of her will, it disappoints him. But this time when he gets an attack and Genda manages to finish the jewellary sets on time, he gets happy with her and tries to fix things between them. Will this Dussehra bring in a new beginning in Genda and Varun’s relationship?”

Experience the one of a kind good-over-evil moment in &TV’s Mauka-E-Vardaat- Operation Vijay when Dusht Daitya gets defeated. Spreading horror across the city, Dusht Daitya wants to resurrect all the nine heads of his siblings. It will be interesting to watch the jaanbaaz police officials trying to stop the Daitya from reviving all the heads. Talking about this thrilling track Piyush Sahdev as Police inspector Piyush Rathore from &TV Mauka-E-Vardaat- Operation Vijay shares, “Even though the Dusht Daitya tries his best to resurrect all his siblings’ heads, his youngest sister Aroopa’s head won’t allow her brother to evoke the power of 10 evils. This helps the cops to stop Dusht Daitya but nobody was aware of his ultimate weapon!”

It is believed that Dussehra marks new beginnings, prosperity and happiness. But, anything good is achieved after overcoming a series of challenges and hardships. Similarly, in &TV’s Aur Bhai Kya Chal Raha Hai? Mishra (Ambrish Bobby) gets to know that Nikki, who had feelings for Mishra ling back during college days, is Shanti’s (Farhana Fatema) cousin sister, and that she is coming to stay in their house for some time. To evade the awkward situation and ensure peace in the house, Mishra disguises as Happy Singh. But this plan terribly fails when Nikki ends up falling for Happy and Shanti convinces him to get married to her. Will Mishra confess the truth before it is too late? Elaborating more on the track, Ambrish Bobby as Ramesh Prasad Mishra from &TV’s Aur Bhai Kya Chal Raha Hai? says, “There have been times when we try to wipe the slate clean but then sometime situations brings you right in front of your past without allowing any chance to escape. To hide his past, Mishra builds a castle of lies and gets trapped in it as his wife tries to get Happy and Nikki married. Will Mishra be able to tell the truth and resolve the issue? Watch this interesting track to find out more.”

Dussehra teaches us that good always wins over the evil, but in &TV’s Happu Ki Ultan Paltan, Happu’s (Yogesh Tripathi) paltan is impressed with the evil Raavan after watching Ram Leela. According to them even though Raavan gets killed at the end, he had one of the most luxurious lives and lived as the king of Lanka. How will Happu, Rajesh (Kamna Pathak) and Katori Amma (Himani Shivpuri) teach them to always side with the right? Yogesh Tripathi as Daroga Happu Singh from &TV’s Happu Ki Ultan Paltan says, “Nowadays the younger generation has its own way of looking at things. Similarly, the kids in the house share that their favourite Ram Leela character is Raavan, leaving the elders in the house astounded. Now the viewers have to wait and watch to see how Happu teaches them a lesson.”

Dussehra celebrations begin in &TV’s Bhabiji Ghar Par Hai and the entire Modern colony is excited for it. But with Ramleela being one of the planned activities, the men in the colony – especially Vibhuti and Tiwari, consider themselves to be the best fit to become Ram. To make the selection process easy and smooth, the committee decides to offer the role to the one with the highest points earned on his good behaviour. Both Vibhuti and Manmohan Tiwari (Rohitashv Gour) try their best to sabotage each other’s chance of becoming Shri Ram. Rohitashv Gour as Manmohan Tiwari says, “Playing the role of Shri Ram is a matter of high prestige, so all the men in the colony are trying their best to grab the opportunity by achieving highest points as well as trying to lower the chances of others in the race. Both Tiwari and Vibhuti try their own ways to get back on each other. But will anyone of the two win?”