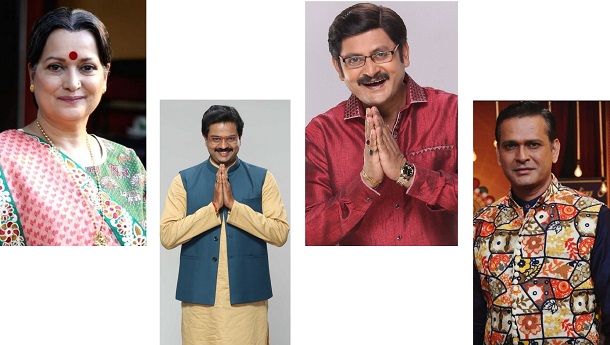 Ambrish Bobby, Ramesh Prasad Mishra in &TV’s Aur Bhai Kya Chal Raha Hai says, “On the occasion of Hindi Diwas, I would like to shed light on the wonderful language that is Hindi. Being in the entertainment industry in India, the knowledge of the language is integral. Hindi is so diverse in the way it is spoken, from shudh Hindi to the various dialects expressed in different parts of the country. Even in the show, my character speaks Awadhi Hindi at times to better connect with the audience.”

Rohitashv Gour, Manmohan Tiwari in &TV’s Bhabiji Ghar Par Hai shares, “We use Hindi daily to communicate and express ourselves in the best way possible. I have been lucky to have been exposed to theatre, films and television projects that encouraged me to upgrade and enhance the Hindi language, and I wish everyone feel proud in learning Hindi.”

Sameer Dharmadhikari, Agrasen Maharaja in &TV’s Ghar Ek Mandir – Kripa Agrasen Maharaja Ki says, “My efficiency in fluently communicating in the Hindi language has provided me with with the opportunity to grow in the Hindi entertainment industry. Everyone who wants to succeed in the industry must learn and enhance their Hindi speaking and writing abilities. When reading scripts, I always preferred receiving them in Hindi itself because no other language could capture the true essence of the dialogues. As Indians, we are all proud of the Hindi language and continue to celebrate Hindi Diwas every day of our life.”

Himani Shivpuri, Katori Amma in &TV’s Happu Ki Ultan Paltan shares, “It is necessary to know and have a good command over the Hindi language. We are a part of the Hindi entertainment industry and performing in such a field without knowing the language would be a shame. Hindi allows you to understand so many feelings that other languages cannot begin to comprehend. All the actors who have made a name for themselves, from Dilip Kumar sahab to Amitabh Bachchan ji they have wonderful knowledge of the language. And what makes them so successful is their ability to wow the audience with their command over their speech.”