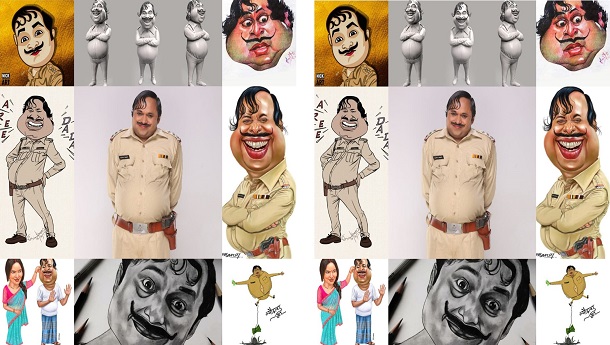 An artist lives for the recognition of his craft. Nothing satisfies him more than the love from his audience. The same stands true for our very own Daroga Happu Singh portrayed by Yogesh Tripathi in &TV’s Happu Ki Ultan Paltan. The Happu Singh’s character has been an instant hit from the time it first appeared on television, and his popularity continues to soar with every passing day. Sharing some of the fascinating fan moments, Yogesh Tripathi, who essays the role of Happu Singh, shares, “As an actor, we always look up to our viewers and fan’s appreciation and love which motivate us to do our best. I feel blessed to receive so much admiration. Speaking of which, some fans and their unique ways of showing their love has amazed me so much and left me speechless. One such fan as I vividly remember is Manoj Sinha, a renowned cartoonist who drew a caricature of Happu! It is supremely amazing! I loved it so much that I decided to put it up in my makeup room on the sets, where my character gets into its avatar. The caricature is certainly my all-time favourite picture. Almost everyone who has been on the sets and in my makeup room has appreciated this piece of art! In another incident, a fan from Gujarat carefully curated a beautiful album that consisted of images that even I do not have. I was awestruck! I still have kept the special compilation with me. Almost every week, several fans from across the country keep sharing these wonderful paintings, sketches, caricatures and cartoons with me. Each being super special in itself! Even the fan pages continue to make montages, memes and collages of me and the cast. Some of them are quite amusing and entertaining! I keep sharing them a lot on my Instagram page.”

Talking about a memorable fan moment, Yogesh elaborates, “One day, I had a fan travelling all the way from Agra to Mumbai to see me. Initially, I was hesitant to let a stranger into my house like this and thought he would eventually leave. However, he was ready to wait outside as much time as it takes. He did not leave the premises and stood there to meet me till the next day. This gesture so touched me. Some fan moments are just too precious and emotional. One of my fans from the Dubai video called me on his birthday, requesting to start his special day by seeing me and speaking with me. I was filled with emotions to know that people wanted to share their special days with me. I was a part of his cake-cutting ceremony, and he mentioned how much he enjoyed watching our show. Every day, I get so many fan messages that truly make my day. It is so wonderful to see fans appreciating your work and you, in turn, bringing smiles to their faces through the medium of your show. To summarise, In the words of Happu - Arre Dada, inn fans ke pyaar ne to mere gurde chil diye!”