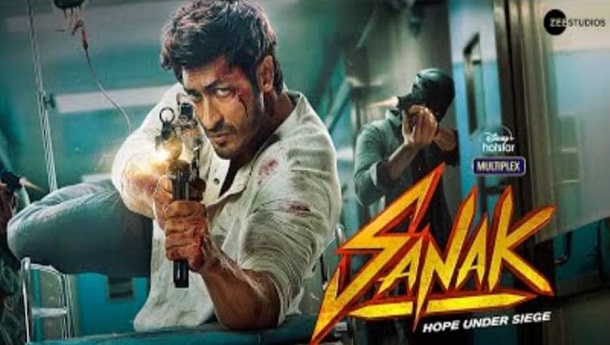 Sanak is one of the finest action thriller of Vidyut Jammwal. Director Kanishk Varma has tried his level best to explore the talents of Vidyut Jammwal at his best. Apart from outstanding performance of Vidyut Jammwal, actress Rukmini Maitra also enhances the beauty of the film with her mind-blowing prformanc and innocent look.

Story revolves around Vivaan Ahuja (Vidyut Jammwal) whoes wife Anshika (Rukmini Maitra) was stuck in a hospital which was captured by terrorists. Anshika and others became entrapped in a hostage situation. Terrosists wanted to bargain with the Govt. to release a traitor Ajay Pal Singh who was admitted there. Vivaan enters in the hospital with the help of a guard and kills single-handedly all the terrorist before the commandos enters. Climax is the real crux of the the story. To now what happens at the end, one must watch the film.

Although music does not play major role in this action-packed film but still the  the score by Saurabh Bhalerao and songs by Chirrantan Bhatt and Jeet Gannguli are quite impressive.

Overall, this is one of the finest action movie of the year. Hard core-action movie lovers must watch this film. The best of the action scenes of Vidyut Jammwal can be seen in the film. So, it can be recommended to watch at least once.