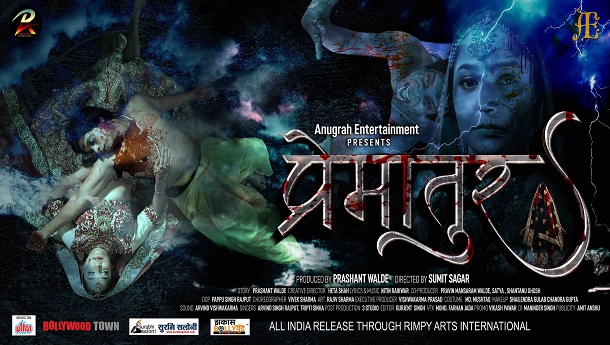 Director Sumit Sagar’s 'Premaatur' is one of the finest horror love story of the year. This is basically the story of two couples living in a palace. Prashant Walde, Heta Shah, Kalyani Kumari and Sriraj Singh are in lead roles and apart from them, Shantanu Ghosh, Amit Sinha, Veer Singh and Bidya Kumari are also in prominent roles in the film.

The story revolves around a newly married couple Arjun (Prashant Walde) and Pooja (Heta Shah) who belongs to a land-lords family and lives in a palace. One day, a college friend of Arjun comes in their life and their life takes a turn. Arjun doubts on the character of his wife and one day while fighting with each others unknowingly  Arjun hits Pooja and un-fortunately she dies. This incident changed the entire life of Arjun because Pooja during her last moments of life clarifies that she loved only him (Arjun) and there were no other men in her life. Arjun takes her dead body to his Kul Devi’s temple and promises to donate peoples head if she (Goddess) can make Pooja alive. After few days, another young couple Rahul (Sriraj Singh) and Sonia (Kalyani Kumari) came to stay in that palace. The day they came, Sonia started feeling something unusual there in that palace. She felt some supernatural powers there and informs Rahul also but he ignored it. Gradually, after few days she comes under those supernatural powers in the palace. The actual twist starts from here in the film. Climax is the real crux of the story so, one must watch the movie to know whatever happens at the end.

Heta Shah looked pretty and she is the centre of attraction in the film. She has impressed the audience with her mind-blowing performance. As we know actor Prashant Walde has worked in many movies of megastar SRK (Shah Rukh Khan) as his body double. Because he looks like SRK so, in this film too, we can have a feeling of SRK in many of his scenes. Actor Sriraj Singh’s performance is good. Apart from them, other artists have also done justice to their parts.

The melodious music of Nitin Raikwar is quite impressive. Apart from horror, this film has quite few romantic scenes as well. Prashant Walde’s romance steps are another attraction of the film.

Overall, this is a fine blend of horror and romance. This is a nice attempt by the filmmaker so, it can be recommended to see at least once.