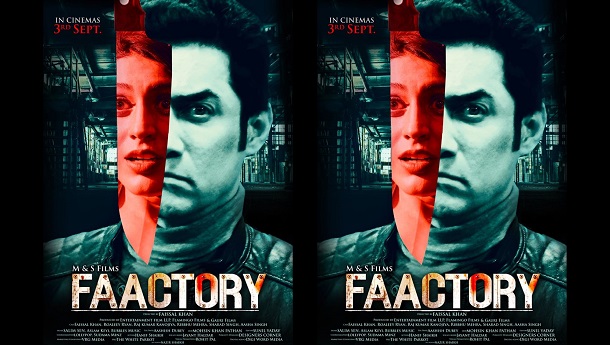 Faissal Khan's directorial debut 'Faactory' is a thriller movie starring Faissal Khan and Roaleey Ryan in lead roles and apart from them actor Raj Kumar Kanojia is also in a prominent role in the film. As we know, Faissal Khan is brother of megastar Aamir Khan and audiance have seen them together in 'Mela' (2000).

The story revolves around a psycho killer Yash Kadam (Faissal Khan) who silently loves Natasha (Roaleey Ryan) and goes beyond any limit to find her. He destroys her personal life and kidnaps her. He takes her to a factory where he reveals his love towards her and gradually, he also shares how he killed her husband to clear his path. Climax is the real crux of the story. To know what happens at the end, one must watch this film.

Gorgeous Roaleey Ryan is the center of the attraction in the film. She impressed the audience with her mind-blowing performance. She looked pretty in the film. On the other side actor Faissal Khan has also justified his role as a psycho killer in the film. Although Raj Kumar Kanojia has a small role in the film but still he did justice to his part.

The music of Salim Sen and Aslam Keyi is quite impressive. The songs like 'friday ho dryday ho, mhala daru pahije' compels the audience to shake their legs in cinema hall. The other song 'Ishq tera...' is also quite impressive. If these songs were in a big budget movie, then I think, it could have done wonders. Faissal Khan himself has sung a song in the film.

Overall, this is one of the finest thriller movies. It holds the attention of the audience till end. I would say, watch it to know the limits of a psycho lover. So, why to wait, go and watch it in your nearest cinema hall.