BHUJ: The Pride of India 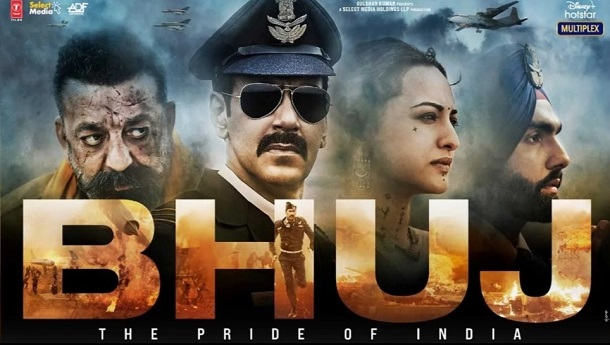 Film: BHUJ: The Pride of India

Bhuj The Pride of India is a period war film based on 1971 India and Pakistan war. Director Abhishek Dudhaiya has beautifully showcased the India's struggle to save Bhuj from Pakistan's attack.

Movie starts with Pakistan's attack on Bhuj area. This war was actually the side effect of formation of Bangladesh that was actually taken by India from Pakistan and given it to the locals of Bangladesh as an independent country. Pakistan destroys the bridges that connects Bhuj from India and also destroyed the Bhuj Airbase badly. Now India had no choice but to use the other airbase those were far away from Bhuj. Looking at the situation, India's then PM Mrs Indira Gandhi allowed Indian Army to use any strategy to protect Bhuj from Pakistan. The Indian Airforce pilot Vijay Karnik (Ajay Devgn) with the help of local residents of Bhuj area repairs Bhuj Airbase before Pakistan's army enters the region. This was the toughest ever mission for India but accomplished within the required time period. Climax is mind-blowing so people must watch the film to know what happens at the end.

Ajay Devgn is the center of attraction in the film. Other than him, Sanjay Dutt's role as a Ranchhordas Pagi, Ammy Virk and Sharad Kelkar as a brave war heroes increase the beauty of the film. In the role of a local citizen of Bhuj, Sonakshi Sinha has justified her role. Other actors have also done justice to their part.

The powerful punches and mind-blowing dialogues actually enhances the beauty of the film. Although this is based on a real story but somewhere director Abhishek Dudhaiya has taken a cinematic liberty in the film but that was the demand of the script to the extend to create the environment of patriotism. Some powerful dialogues are beautifully delivered by Ajay Devgn like “Maratha sirf do hi baat jaanta hai, maarna yaa marnaa”. In an another dialogue when a Pakistani Army officer says on phone that “Taj Mahal Pyaar ki nishani hai” then Indian officer Vijay Karnik (Ajay Devgn) beautifully reply saying “Hindustan tere baap ki kahani hai”. Sanjay Dutt’s dialogue “kabira kyun jung ka elaan hai, aaj khuda khud pareshaan hai” and Nora Fatehi’s dialogue like “Ya Khuda teri adaalat me meri ek jamaanat rakhna, main rahun ya na rahun, mere Hindustan ko salaamat rakhna” impresses the audience.

Although music does not play major role in this film but still it’s quite impressive. The music is composed by Tanishk Bagchi, Gourov Dasgupta, Lijo George - Dj Chetas and Arko while lyrics written by Manoj Muntashir, Devshi Khanduri and Vayu.

Overall, this is a mind-blowing film with powerful punches. Movie spreading feel of patriotism so, no Indian should miss it. It’s a must watch film. It’s a great tribute to the real heroes of Indian army. Hindustan Zindabad.