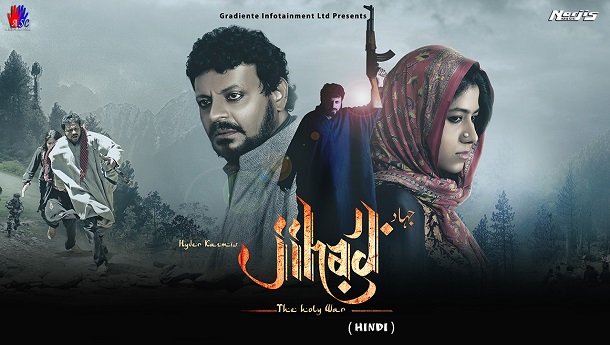 Director Rakesh Parmaar’s Jihad is all about the life and journey of a terrorist who later understands the facts behind modern Jihad but till then it becomes too late. Actors Hyder Kazmi and Alfeeya are in lead role in the film.

Jihad beautifully defines the word jihad. The story idea is from its lead actor Hyder Kazmi. Movie talks about Jihad that does not allow someone to kill innocent people but its all about killing evil hidden inside yourself.

Movie starts from the training and brain washing of young Muslims who are send to Pakistan in a terrorist training camp to get a hardcore training so that they can spread terrorism in India especially in Kashmir. Altaf (Hyder Kazmi) is one such trained terrorist who comes back to Kashmir after completion of his training in Pak terrorist camp. He does few terrorist activities in Kashmir but meanwhile he comes in touch with a Kashmiri Hindu girl (Alfeeya) and his philosophy of Jihad changed. Whatever happens at the end is the real crux of the story.

Good intention of the filmmaker can be seen since movie has a good message. Locations are real and fits with the storyline. Cinematography is good and appreciable. Lead actor Hyder Kazmi has justified his part in the movie. The best part is it’s climax. It gives cover to other lose points of the film.

The unwanted length of the movie actually destroyed the craze of watching this film. Movie is so slow that audience will get either bored or irritated. Known faces of Bollywood are missing in this film. The emotional connect could not be properly developed between the lead pair. There were hardly any twists and turning points in the film that actually requires to holds the attention of the audience.

Overall, this is an average film but since there is a good message and a mind-blowing climax with a positive intention of the film maker, so this can be recommended to see at least once.