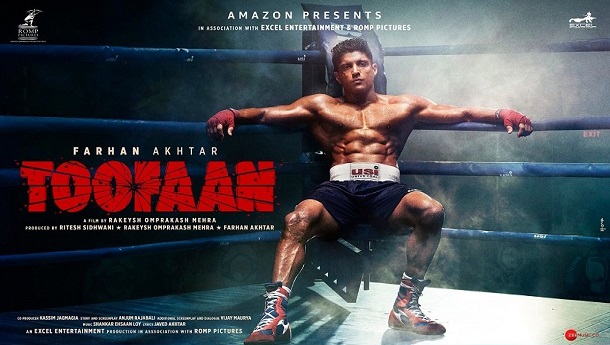 Movie revolves around a street boy Aziz Ali aka 'Ajju Bhai' who lives in Dongri area of Mumbai city. Ajju is an orphan but taken care by a local goon Jaffar bhai (Vijay Raaz) who involved him in his illegal business operations like extortions etc. One day he goes to a boxing training centre in his area where he gets impressed with this game and started dreaming to be a boxer. The coach of that local training centre recommends the name of Mumbai’s top boxing coach Nana Prabhu (Paresh Rawal) and suggests him to take training under him if he wishes to be a boxing champion. So, finally Ajju goes there. Initially Nana avoids him but looking at his sincere approach he starts his training and makes him a successful boxer. Twist comes in his life when Nana Prabhu comes to know that Ajju is in love with his daughter Dr. Ananya (Mrunal Thakur). To know what happens at the end, one must watch this movie.

Farhan Akhtar transformed himself to look like a perfect boxer. Other than his physical appearance, he has also tried to justify his role in the film. Apart from Farhan, Mrunal Thakur and Paresh Rawal have also done justice to their roles. The innocent look of Mrunal Thakur impresses the audience. Although Supriya Pathak, Vijay Raaz and Mohan Aghase have small roles but to the larger extend they have done justice to their part. Director Rakeysh Omprakash Mehra is the surprise element in this film. He has played a small role of a senior officer at Indian Boxing Federation.

Although music does not play a major role in the film but still it entertains the audience.

Despite having big star cast and renowned director like Rakeysh Omprakash Mehra, film does not meet the expectations of the audience. There are many reasons behind it. The length of the movie is a major problem. The unwanted scenes and dialogues irritate the audience and same is the case here. The poor storyline is another problem of the film. The Hindu-Muslim angle in the story may not be required. Boxing is not a popular game in India so, the scope of creating a curiosity about watching such movie is a bigger challenge. Since the climax is easily predictable so, the film could not hold the attention of audience even till end.

Overall, 'Toofaan' does not meet the expectations. This time, not just director but even lead actor Farhan also disappointed the audience.