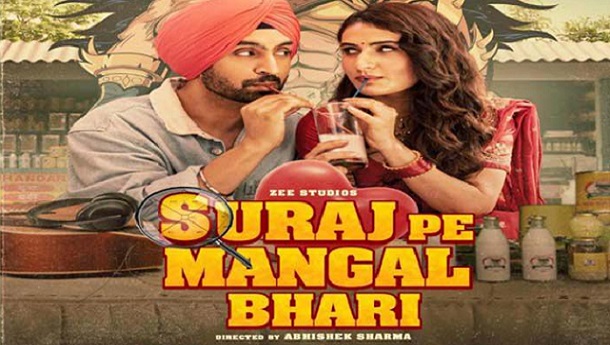 Director Abhishek Sharma’s Suraj Pe Mangal Bhari released in theatres after lockdown situations in the country. Most of the cinema halls are now open in the country but cinema hall owners were eagerly waiting for new movie releases. It’s slow start but somewhere things started at least after 8 months.

This beautiful comedy movie revolves around Suraj Singh Dhillon (Diljit Dosanjh), a Punjabi guy running his family business of milk and milk products in Mumbai. Madhu Mangal Rane (Manoj Bajpayee) is a detective by profession who creates problem in Suraj’s marriage. When Suraj comes to know about his conspiracy, he decides to take revenge from Rane. Accidently he meets Rane's sister Tulsi Rane (Fatima Sana Shaikh) and falls in love with her in first sight. Twist in the story starts from here. One must see the film to know what happens at the end whether Suraj finds his love and takes his revenge from Madhu Mangal Rane or not.

This is full of comedy. You can’t stop laughing on many scenes. Diljit Dosanjh has simply impressed the audience with his mind-blowing performance. Manoj Bajpayee has also justified his role. Fatima Sana Shaikh’s pretty look impresses the audience. Other artists like Annu Kapoor, Supriya Pilgaonkar, Manoj Pahwa, Seema Pahwa and Vijay Raaz have also justified their roles in the film. Overall, everyone has given their best and entertained the audience with their fine performances.

Music is another attraction in this film. Almost every songs are impressive. In short, music enhances the beauty of the film.

Screenplay and dialogues are simply mind-blowing. Its beautifully written.

Overall, this is a nice comedy and very much upto the expectations of the audience. So, it can be recommended to see at least once.