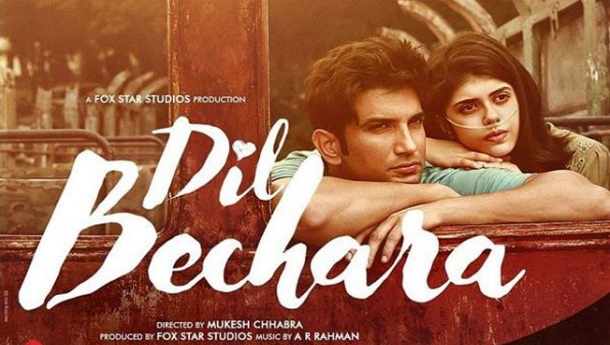 This directorial debut of Mukesh Chhabra is based on the book 'The Fault in Our Stars' written by John Green. Due to Corona pandemic, this is released on OTT plateform.

This is an innocent love story of two cancer patients Kizie Basu (Sanjana Sanghi) and Manny (Sushant Singh Rajput). Once Kizie meets Manny and had some chit chat between them. Initially Kizie distances herself from Manny but later on they bond over movies and music and fall in love with each other. To know the climax, one must see this movie.

This movie is considered as the last on screen appearance of Sushant Singh Rajput so this movie really connects the emotions of the audience in a big way. Every smile and dialogues by the Sushant Singh in this movie can make audience emotional. On the other side new comer Sanjana Sanghi looks pretty in the movie. Her innocent face completely fits into the character of Kizie Basu. The performance of both the actors are mind-blowing. Although Saif Ali Khan has a small role but quite impressive. He has just one scene but his dialogues are very impactful.

The melodious music of AR Rahman impresses the audience. The title song is quite impressive and even other songs too are very much lovable.

The base of the story revolves around a popular saying, 'Ek tha raja ek thi rani, dono mar agye khatm kahani'. As per climax is concerned, the film has an emotional connect. Director Mukesh Chhabra has beautifully managed the things. This is an inspirational movie that no one should miss.