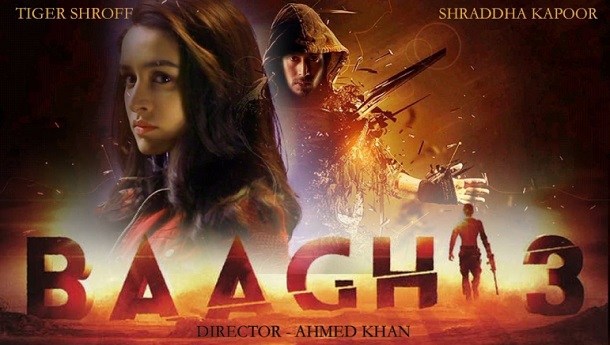 Director Ahmed Khan's third installment of Baaghi franchise is full of action, action and only action. Baaghi3 is more powerful than previous installments. We can say is the best utilisation of the talents of Tiger Shroff. This time he has proved himself as a real action hero of Bollywood.

Story belongs to Ranveer Pratap alias Ronnie (Tiger Shroff) who gives a promise to his father (Jacky Shroff) to protect his elder brother Vikram Pratap (Ritiesh Deshmukh) before he died. His father was an honest police officer and after his death, his elder son Vikram Pratap gets job of a police officer. After some twists and turning points, Vikram got married to Ruchi (Ankita Lokhande) who is sister of Siya (Shraddha Kapoor) who one day accidently meets Ronnie and had a small fights among them but after marriage of Vikram and Ruchie both comes closer to each other. Since Vikram is not that courageous and powerful so, he takes help of Ronie in his every problems since childhood. Ronie helps Vikram even after Vikram joins police force. Twists comes in their life when Indian Govt. sends Vikram to Syria for a mission. Vikram got captured in Syria by a terrorist group headed Abu Jalal (Jameel). Now, Ronie had no choice but to go to Syria and save his brother. Whatever happens at the end is the real crux of the story.

Tiger Shroff is the centre of attraction in the movie. He looked like a perfect action hero. Apart from him, other artists like Ritiesh Dseshmukh and Shraddha Kapoor have also justified their roles. Although Jacky Shroff, Ankita Lokhande and Satish Kaushik have small roles in the film but they have made their presence felt.

Although music does not have much roles to play in such action-packed movie but still songs are quite impressive.