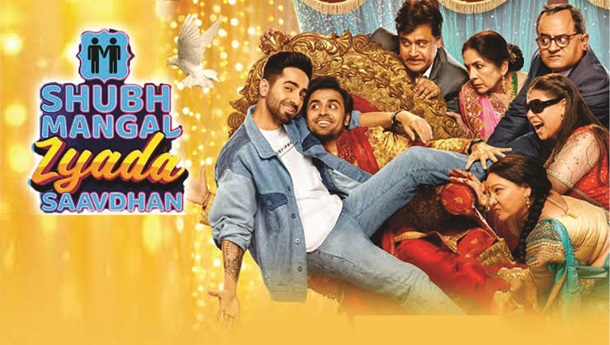 Shubh Mangal Zyada Saavdhan. This is a social problem comedy directed by Hitesh Kewalya that focuses on the same sex marriage.

The story is all about gay relations. It revolves around Kartik (Ayushmann Khurrana) who loves his friend Aman Tripathi (Jitendra Kumar). Aman belongs to Allahabad but working in Delhi where he meets Kartik and rest is the history. Once Aman along with Kartik comes to Allahabad to attend his cousin sister’s marriage where Aman’s father caught them coloured handed in train and thus problem starts from here and gradually entire family came to know about their physical relations. After lots of twists and turnings, Aman’s family comes to a situation where they had no clue what to do with their un-usual and un-natural relations. Climax is everything in this film. One must see the film to know what happens at the end.

Gajraj Rao and Neena Gupta are the centre of attraction in the film. Lead actors Ayushmann Khurrana and Jitendra Kumar have also justified their presence in the film. The other actors have also performed well. Bhumi Pednekar has a small role in the film but she has impressed the audience with her small but mind-blowing performance.

Screenplay and dialogues are the backbone of this film. Screenplay is written so nicely that no one can stop laughing on almost every scene. In most of the scenes comedy is created when Neena Gupta and Gajraj Rao appears on screen.

Music does not have much roles to play in this film but to the extent it’s quite impressive.

The only issue with the film is it’s climax. The climax of the film cannot be acceptable by the audience at large. The kind of message which are given at the end may or may not be justified. Overall, this is full of entertainment and one cannot stop laughing while watching this movie. This un-usual love story can be recommended to see at least once.  So, go and watch it for entertainment and entertainment only.