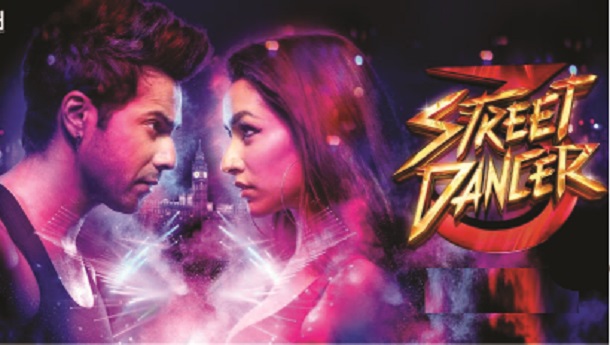 Director Remo D’soza’s Street Dancer 3D is all about dance, dance and only dance.

Story belongs to Sahej (Varun Dhawan) who is a young London based NRI. He is fond of dancing and running a dance group in the name of Street Dancer along with his few local NRI friends there. His hobby of dance becomes a mission when his brother got injured while dancing in a big dance competition. He decides to fulfill the unfulfilled dreams of his brother. On the other side, there is another group of dancers headed by Inayat (Shraddha Kapoor), who is a London based Pakistani girl. She has some of the local Pakistani boys in her dance team. There is a parallel story of another NRI Ram Prasad (Prabhudeva) who works as a manager in a hotel. Both the dance team used to meet in his restaurant and many of the time both the group fight with each other on many occasions, especially when there is cricket match between India and Pakistan. Twist comes in life of Inayat when she comes to know about the secret activity of Ram Prasad who used to feed, helpless and illegal migrants of India and Pakistan living in London. He was trying to help them to send back to their countries but for that huge money was required but unfortunately Ram Prasad had no money so he was helping them within his capacity. Inayat decides to support Ram Prasad in this mission but even financially she was not able to fulfill the requirements but that much money could have been earned through winning a dance competition which was supposed to happen in London. Since, none of these groups had a capacity to win this competition alone so, Ram Prasad suggests Indian and Pakistani groups to have a joint hand to win this competition but this was not acceptable to Sahej. Whatever happens at the end is the real crux of the story.

Although dance and music are the real strength of the film but the poor storyline damaged almost the entire movie. For a dance lover, this is exceptionally good film but for a common audience, this cannot be considered upto the mark. Prabhudeva and Nora Fatehi’s performances are good and their dance steps are simply mind-blowing. Apart from them, lead actors Varun Dhawan and Shraddha Kapoor have also justified their roles in the film.

Music enhances the beauty of the film. Since this is a dance film so music has a bigger roles to play in this film. Recreation of old song ‘Mukabala o Laila…’ is quite impressive. Once again audience can see the magic of Prabhudeva’s dance.

This can be considered as one of the finest movie as per dance and music is concerned but somewhere poor storyline has damaged the movie to the larger extend. Despite of having big actors like Varun Dhawan and Shraddha Kapoor, movie cannot be considered as the best for all but this can be strongly recommended to the dance lovers to watch.