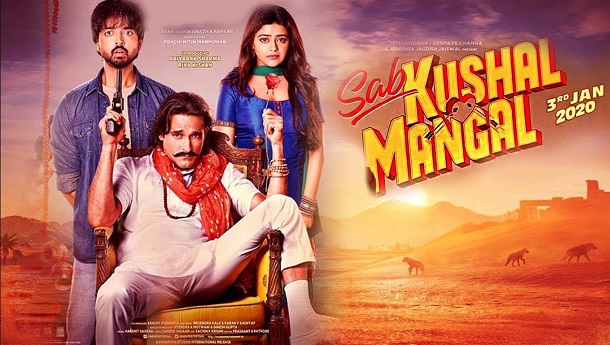 Director Karan Vishwanath Kashyap's 'Sab Kushal Mangal' is a family entertainer. The popular household name of Indian TV industry, Jaya Ojha is a surprise element in the film. She has played the role of actress Riva Kishan's mother in the film. Although she has a small role but it's quite noticeable.

This family entertainer is all about a local goon Baba Bhandari (Akshaye Khanna) who belongs to a small town Colonel Ganj. Baba takes a contract of marriages which are done forcefully without prior consent of groom’s families. Parents approaches Baba for a help who are not able to pay heavy dowry and he organizes such marriages forcefully. Shuklaji (Rakesh Bedi) approaches Baba for help because even he could not pay heavy dowry for his daughter. Baba’s this activity/profession is exposed by a TV journalist Pappu Mishra (Priyank Sharma) so Baba decides to capture this journalist and do the same thing with him as well. Now he decides to organize a marriage of Shukla’s daughter Mandira (Riva Kishan) with journalist Pappu Mishra. Before the marriage, after some twists and turning points, even Baba started loving Mandira so he postponed Pappu’s marriage but it was too late because till then even Mandira started loving Pappu. Since Mandira like a person with a metropolitan culture and lifestyle so Baba now wants to change his life style specially clothing sense and language. He asks help from Pappu for the same. One must see the movie to know what happens at the end.

Actors like Akshaye Khanna and Satish Kaushik have impressed the audience with their mind-blowing performances. Other actors like, Rakesh Bedi, Supriya Pathak, Jaya Ojha and newcomers Priyank Sharma and Riva Kishan have also justified their presence in the film. Overall, every actors have justified their part.

Music of Harshit Saxena and score by Raju Singh are quite impressive. The songs with deshi tadka are quite powerful and gels with the storyline.

Overall, film is quite impressive and entertaining. Akshye Khanna’s role is highly appreciable. This is the best possible movie for two tier cities and rural areas. This can also impress the metropolitan audience but the storyline can impress more to the single screen audience. Since this is full of entertainment so it is highly recommended to see at least once.