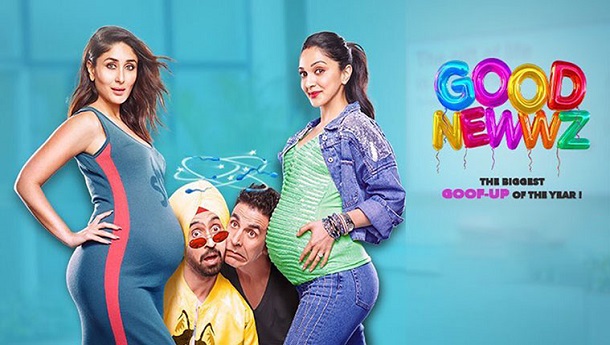 The release of ‘Good Newwz’ during Christmas and New Year is really a good news for comedy movie lovers. Year 2019 was quite good for many film makers and 'Good Newwz' is absolutely one of the biggest entertainer of the year. With this, we can say that Bollywood will end this year and start a new year with a good note.

This is basically a story of two married couple who have no choice but to go for the IVF process to get a child. A Mumbai based married couple Varun Batra (Akshay Kumar) and Deepti Batra (Kareena Kapoor Khan) tried their best for a child in last seven years but could not become successful. Same is the story of a Chandigarh based married couple Honey Batra (Diljit Dosanjh) and Monika Batra (Kiara Advani). Finally, both couples try their luck in a Mumbai based IVF centre run by Dr. Joshi (Adil Hussain) and his wife Mrs.Joshi (Tisca Chopra). Problem starts in their story when they come to know that their semen exchanged in the medical lab due to their same surname. After that, whatever happens at the end are the crux of the story.

The performance of Akshay Kumar and Kareena Kapoor Khan are really appreciable. On the other side, actors like Diljit Dosanjh, Kiara Advani, Adil Hussain and Tisca Chopra have also justified their roles with their mind-blowing performances. Overall, as per story is concerned, movie has the best possible actors. Innocent look of Kiara Advani and situational comedy by Diljit Dosanjh increases the beauty of the film.

The melodious music of Tanishk Bagchi, Rochak Kohli etc. are quite good. Songs like ‘Chandigarh mein’ and ‘Suada khara khara’ etc. are quite impressive.

This is full of entertainment. Raj Mehta’s direction is highly appreciable. The beautiful comedy, music and emotional scenes are the real USP of the film. One cannot stop laughing from start to end. All the actors have beautifully done their part. Such a serious storyline is represented so uniquely that people cannot stop laughing on almost every scene. This is a must watch movie and it can be strongly recommended to see at least once.