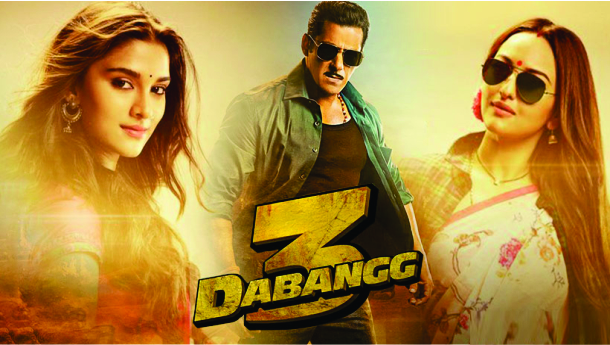 The third instalment of Dabangg series is equally powerful in comparision to its previous installments as per action sequences are concerned. Once again Chulbul Pandey is back with his old avtar.

The first half is the flashback story of Chulbul Pandey (Salman Khan) when he was a young, Chulbul, whose real name turns out to be Dhaakad Chand Pandey, fell in love with a girl, Khushi (Saiee Manjrekar). A local goon Bali Singh (Kichcha Sudeep) also likes Khushi but when he comes to know that she is going to marry Chulbul then he kills Khushi. The death of Khushi changed everything in Chulbul’s life. The second half is all about the revenge part. As usual Chulbul Pandey takes revenge in his own Dabangg style.

The performance of Salman Khan and Kichcha Sudeep are highly appreciable. Other artists like Sonakshi Sinha, Arbaaz Khan, Pramod Khanna and Saiee Manjrekar have also justified their presence in the film. Action sequences are the real USP of the film. Unbelievable shots and scenes can be seen in the film. This is full of action sequences as expected from Dabangg series.

The music of Sajid-Wajid is very powerful and songs like ‘Hud Hud Dabangg’ and ‘Munna badnaam Hua’ etc. impresses the audience. It’s music increases the beauty of the film.

Prabhudeva’s direction is good. Despite of having every good things in the film, the poor storyline damaged almost the entire movie but still this can be one of the best movie for Salman's fan. It can be recommended to see once for heartthrob of million, Salman Khan.