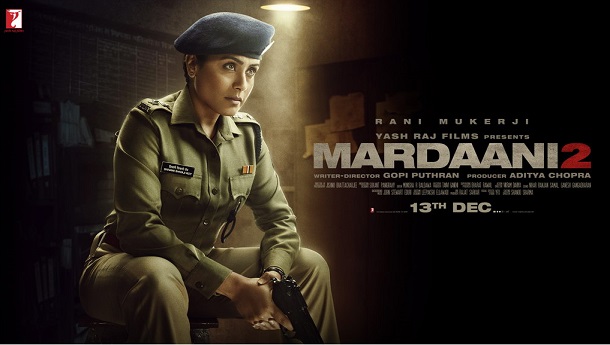 The second installment of Mardaani released today in cinema hall with a double power. Rani Mukerji has once again impressed the audience with her powerful performance as a dynamic senior police officer Shivani Shivaji Roy. The young artist Vishal Jethwa is the surprise element in the film as a lead villain. This new actor has given justice to this role with his hilarious performance.

Story belongs to a senior dynamic lady police officer Shivani Shivaji Roy (Rani Mukerji). She is posted in Kota city of Rajasthan. She goes behind a rapist-killer (Vishal Jethwa). Rapist originally belongs to Meerut city but he has been safe-guarded in Kota city by a powerful and influential local politician named Panditji. Shivani faces lots of challenges in catching this rapist-killer because he plans the rape and murder in such a way that no-body can have doubt on him. It took much of time in nabbing criminal so due to a political pressure, Shivani gets a transfer from Kota. Now she had only two days to leave this city but before leaving, she wants to solve this long pending case in just two days. To know whether she could reach to the criminal or not in such a small span of time, you must see the film.

The brilliant performance of Rani Mukerji impresses the audience. Her power-packed action scenes are simply mind-blowing. The new and young actor Vishal Jethwa is the real surprise element in the film. As a villain, he has surprised the audience with his powerful performance. It seems that Bollywood has got a new powerful villain. Vishal has got a very good exposure in this film. The maturity in his acting can be seen. He has shared the maximum screen space with senior artist like Rani Mukerji. The other artists like Rajesh Sharma, Vikram Singh Chauhan and Vishal Sudarshanwar etc. have also justified their roles in the film.

Action sequences are quite good. Screenplay and dialogues are also nice and quite impressive. The direction of Gopi Puthran is mind-blowing. Because of her powerful performance as a dashing lady police officer Rani Mukerji is always the centre of attraction in the film. This is a must watch movie. We can say that Mardaani is back with a double power.