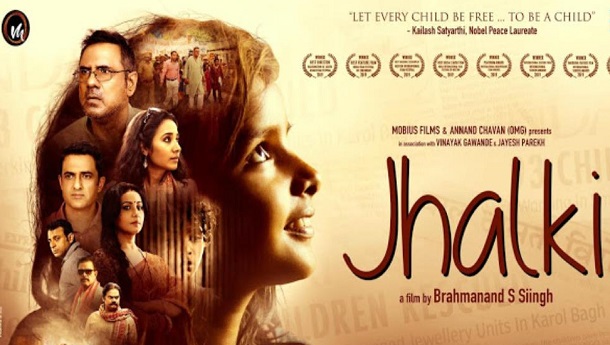 Jhalki is a beautiful movie based on an innocent poor girl child. Film deals about increasing issues of child labour and human trafficking in some parts of Uttar Pradesh.

The story revolves around a girl child Jhalki (Aarti Jha) who does every possible things to search his small brother Babu (Goraksha Sakpal) who was sold by a powerful mean person (Govind Namdev) of her own village to a business man (Akhilendra Mishra) who is into carpet manufacturing. After many twists and turning points, somehow, Jhalki reaches to the city where her brother was sold. She faces many challenges there but finally how she managed to reach him is the real crux of the story.

Apart from child artists Aarti Jha and Goraksha Sakpal, other actors like Akhilendra Mishra, Govind Namdev, Sanjay Suri, Boman Irani and Divya Dutta have also played an important roles in the movie. With her mind-blowing performance, child artist Aarti Jha has impressed the audience. She is the centre of attraction in the entire movie. Other senior and renowned artists have also justified their presence but since story deals with the serious issues of child labour so focus was more on child artists only.

Screenplay and dialogues are nicely written. Sandesh Shandilya’s music is quite impressive and enhances beauty of the film.

Since film deals about the serious issues like child labour and human trafficking so director Brahmanand S. Singh has tried his best to showcase the important points only. Since the film is quite impressive so no one should miss it.