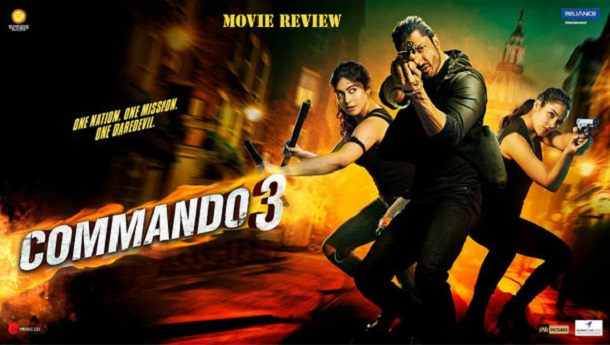 The third installment of Commando series have Vidyut Jammmwal and Adah Sharma in lead roles and apart from them, Gulshan Devaiah and Angira Dhar have also played an important roles in the film.

Story belongs to Karanveer Singh Dogra (Vidyut Jammwal) who is an undercover cop working with Indian intelligence agency. He has been assigned a task to save the country from a terrorist group who is planning to destroy the peace and hormone of India in the name of religion. Finally, somewhere, Karan finds a clue about Buraq (Gulshan Devaiah) who runs a terrorist group from London and is the mastermind behind this conspiracy. Buraq brainwashed few Indian Muslims and not only trained them but also arranged weapons for them to attack in few major cities of India on the occasion of big Hindu festival Dussehra. Karan moves to London along with his colleague Bhavana Reddy (Adah Sharma). He faces lots of challenges there in London while leading this mission. To know what happens at the end, you must see the movie.

This action-packed movie will definitely thrill you from inside. Vidyut's action scenes are really mind-blowing. This action star has really created his own place in the list of India's top action hero and once again he has proved it. Action sequences are not only limited to Vidyut Jammwal but Adah Sharma also has done so many action scenes and impresses the audience. In short, we can say, this movie is all about action, action and manly action only.

Lead actors, Vidyut and Adah have impressed the audience with their powerful performances. Vidyut's screen appearance and action sequences are simply mind-blowing. Gulshan Devaiah's slow motion dialogue delivery is very impressive. Other actors like Angira Dhar etc. have also justified their presence in the film. There are some of the brutal murder scenes that cannot be seen through our necked eyes. There is a scene where Gulshan Devaiah shows his 10 years old son to see how a successful murder can be executed. This, he does in front of his son to remove mercy from his heart for humanity in the name of Islam.

Although in this action packed movie, music does not have much roles to play but Mannan Shaah and Vikram Montrose’s music is quite impressive.

Director Aditya Datt’s action packed movie impresses the audience. We can say, Vidyut Jammwal has once again proved himself as one of the best action hero of Bollywood. On the other side, actress Adah Sharma has also impressed the audience with her outstanding stunts. Overall, we can say, this is one of the finest action movie of the year. This is a must watch for the audience who love action movie. There are some of the brutal murder scenes in the film so I would request guardians to avoid taking kids for this movie.