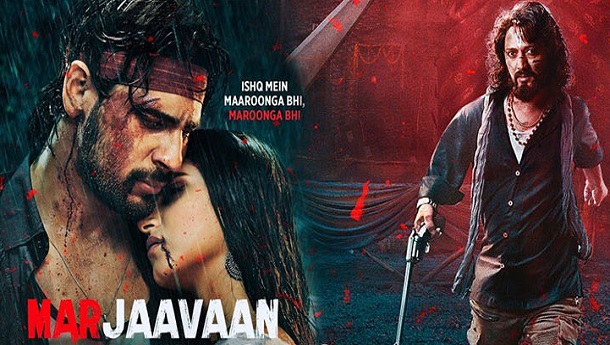 Director Milap Zaveri’s action packed movie Marjaavaan is all about love, sacrifice and revenge. Sidharth Malhotra, Riteish Deshmukh and Tara Sutaria are in lead roles. Apart from them, Nassar, Ravi Kishan, Rakul Preet Singh and Shaad Randhawa have also played the important roles in the film.

Story belongs to a goon Raghu (Sidharth Malhotra) who was an orphan but taken care by a powerful goon Anna (Nassar). Anna's real son Vishnu (Riteish Deshmukh) is a very short heighted. Anna controls the water mafia in Mumbai and his business is majorly handled by Raghu. Vishnu does not like Raghu because he feels that his father trusts Raghu more than him. Raghu is also having very personal relation with a bar dancer Arzoo (Rakul Preet Singh). Vishnu always tried to kill Raghu but his father has strictly told him not to harm Raghu. Twist comes in their life when a dumb girl Zoya (Tara Sutaria) comes in Raghu’s life. Both falls in love with each other but unfortunately, this love story could not meet a happy ending because Vishnu kept on doing conspiracy in Raghu’s life. After lots of twists and turning points, a situation arises when Raghu had no choice but to kill innocent Zoya. We must see the movie to know what happened at the end. Whether Raghu could take revenge of Zoya or not.

Movie is full of action sequences. Almost from start to end Sidharth Malhotra can be seen fighting with goons. There is hardly any story. Riteish Deshmukh starts with powerful dialogues whenever he appears on screen. In short, we can say that movie has powerful action sequences but not having that strong storyline.

The melodious music of Tanishq Bagchi, Meet Bros and Payal Dev impressed the audience. It’s music has played an important role in the film.

Although, poor storyline has impacted the movie badly but it’s music, dialogues and powerful action sequences have created a good impact overall. We can say, it’s a nice attempt by director Milap Zaveri. It can be recommended to see at least once.