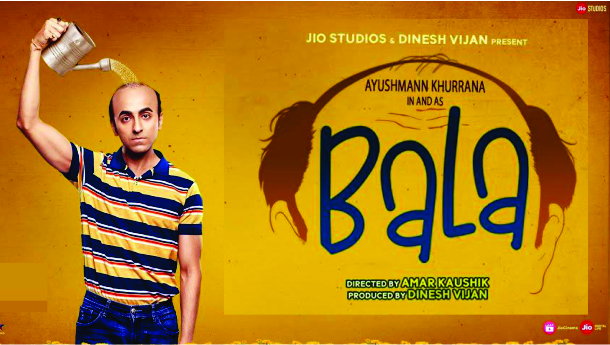 Bala is one of the finest comedy movie with an emotional connect. Ayushmann Khurrana, Bhumi Pednekar and Yami Gautam are in lead roles and apart from them, Saurabh Shukla, Ramayan fame Dipika Chikhalia and Javed Jaffrey have also played an important roles in the film. Director Amar Kaushik’s Bala beautifully showcases the emotional connect of a guy who has lost his hairs in the young age.

Movie revolves around Bal Mukund Shukla (Ayushmann Khurrana), mostly people call him Bala. He belongs to Kanpur city and he has created his image there as a mimicry artist. When he grows in life, he loses his hairs that he had a proud since childhood. He tries everything to regain his hairs but fails to do it. One day, his father (Saurabh Shukla), brings a hair wig for him and asks him to use that. Bala had no choice but to do that. Because of baldness, even his childhood friend refused to marry him. He works in a fairness cream company in it's marketing department. One day he gets a temporary transfer from Kanpur to Lucknow where he meets his own company's brand ambassador Pari Mishra (Yami Gautam). Pari is a popular social media star of Lucknow. He falls in love with her and even Pari too started loving him that leads towards their marriage. Bala had a fear to lose Pari because of his baldness so, before a day of his marriage he dares to share the fact with Pari. He sends a message to her but unknowingly that message went to someone else which he come to know during his marriage time. Unfortunately next day of his marriage Pari came to know about his baldness and leaves him and send a legal notice for divorce. In his defence, Bala hires a lawyer and his childhood friend Latika Trivedi (Bhumi Pednekar) for this case. To know the climax, you must see this movie, whether Pari comes back to Bala or story leads to some other directions.

Supremely talented Ayushmann Khurrana has entertained the audience with his mind-blowing performance. He is the centre of attraction in the film. On the other side, Yami Gautam who has played the role of a social media queen and a model has justified her presence with her pretty look and brilliant performance. Bhumi Pednekar in the role of a dark-skinned girl looked quite good. She is in different look. Ramayan fame Dipika Chikhalia is a surprise element in the film. She has played the role of Yami’s mother and impressed the audience with her small but mind-blowing performance. Her role is quite noticeable and once again audience get an opportunity to see her on silver screen. Other character artists like, Saurabh Shukla, Javed Jaffrey and Seema Pahwa have also justified their roles in the film.

The music of Sachin-Jigar, Jaani and B Praak are quite entertaining. Audience will shake their legs on the songs. Music enhances the beauty of the film.

Director Amar Kaushik has not just tried to make people laugh but also ensured that audience can relate themselves somewhere with the character of Bala. Overall, we can say, the direction is superb and meets the expectations of the audience.

This fun filled movie entertains you the most This movie is for you if you love the comedy genre. Powerful, screenplay and dialogues will keep you engaged throughout. Overall, we can say, this is one of the most lovable movie of the year. So, without having any second thought, you must go and watch it.