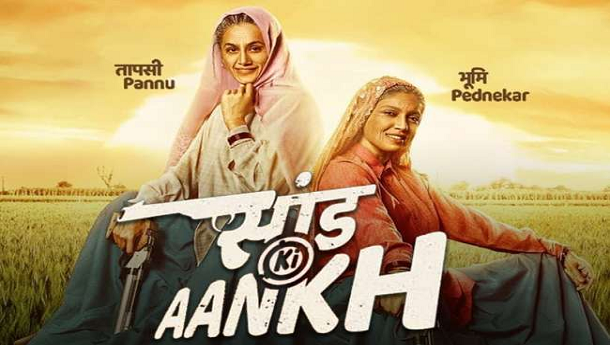 Movie clearly gives a message that you can fulfill your dream at any stage in your life. Age or gender does not matter. You just need to have a firm determination, rest everything will follow you.

It’s all about a male dominated family headed by Rattan Singh Tomar (Prakash Jha). Ratan Singh strongly believes that females are not supposed to pursue their hobbies but to do the household things only. Once, the two old ladies of his family, Prakashi Tomar (Taapsee Pannu) and Chandro Tomar (Bhumi Pednekar) unknowingly participates in a shooting rehearsal organized in the village and hits the Bullseye. Trainer (Vineet Kumar Singh) gets impressed with them and requests them to participate in next big shootings competitions. After lots of twists and turning points, finally both old ladies not just participated in many shooting competitions across the country but also won so many gold medals. These champion ladies not just followed their hobbies but also ensured that the head of the family Rattan Singh Tomar could not get a clue about this. These ladies also took their daughters along with them and trained them. You will have to see the film to know what happens at the end, whether their daughters could also become champions or not, whether head of the family came to know about this or not.

Supremely talented Taapsee Pannu and Bhumi Pednekar impressed the audience with their mind blowing performances in this movie. Although Prakash Jha has not much to play in the film but he has justified his role. Other artists have also performed nicely and done justice with their roles.

Although main strength of the film is it's inspiring story but it's music enhances the beauty of the overall movie. Melodious voice of Vishal Mishra impresses and meets the expectations of the audience.

Director Tushar Hiranandani’s direction touches the heart of the audience. This is highly inspiring story so, no one should miss it. Every aspect of the movie impresses the audience, be it story, screenplay, dialogues, music or direction. So, we need not to think much about it, just go and watch it in your nearest cinema Hall.