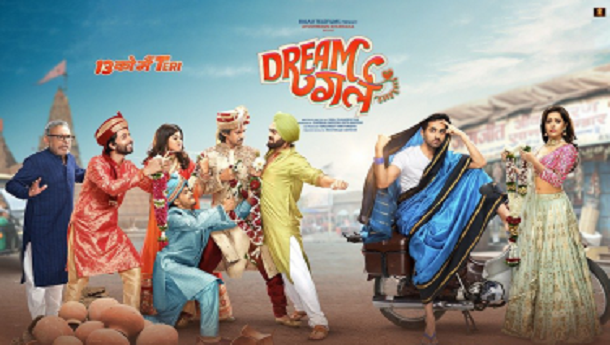 Dream Girl is debutant director Raaj Shaandilyaa’s beautiful creation that will definitely make you laugh in almost scenes. We can say, this is one of the finest comedy movie of the year.

Story starts with Karamveer Singh (Ayushmann Khurrana) who is an educated but unemployed guy living in Mathura city. He is the expert of speaking in female voice so every year he gets the role of Sita in local Ram Leela that actually impacted his image in the town. People used to tease him as a Sita. His father Jagjit Singh (Annu Kapoor) runs a small shop in the town but the earning from that shop is not enough to pay off the loans he has taken from the banks. Karam has a very close friend Smily (Manjot Singh). He runs a wine shop. One day Karam falls in love with Mahi (Nushrat Bharucha) and luckily situation favours him and soon he gets engaged with her.  One day while searching a job he reaches to a call centre. This call centre is to make a girl-friend and have gossip on phone. With his female voice, he impresses the owner of the call centre and gets the job there. To work there in the call centre, he renamed himself as a Pooja for telephonic friends. With the magic of his female voice he creates so many followers including his father, brother-in-law and a police officer (Vijay Raaj). Situation becomes horrible when many of his phone friends proposes him (means Pooja) for marriage. Situation becomes more horrible when all of them wants to meet Pooja. In between these incidents, lots of comedy is created. When situation becomes out of control, somewhere he had no choice but to disclose the fact about Pooja of that call centre. As expected, after lots of twists and turning points finally film reaches to a desired happy ending.

Music of Meet brothers has enhances the beauty the film. All the songs are good and enjoyable. Apart from star cast and storyline, it’s music has played another big role in this film.

Ayushmann Khurrana has played simply the best role as a Pooja. His screen appearance is mind-blowing. After long time he is back with versatile actor Annu Kapoor. Annu Kapoor is a brilliant actor and the magic of his acting can be seen once again in Dream Girl. Nushrat Bharucha looks pretty in the role of Mahi. She has also justified her presence in the movie. Manjot Singh has played another important character in the film as a close friend of Ayushmann Khurrana. He has also impressed the audience with his powerful acting. The comedy by actor Vijay Raaj and Annu Kapoor actually impresses the audience in almost every scene they appeared. Overall, every actor have contributed to make this a perfect comedy film.

The direction of Raaj Shaandilyaa has impressed the audience. We can say, this is one of the best comedy film of the year. This film has almost everything to entertain you, be it, comedy, romance, emotion, music or drama. So, it can be strongly recommended to see at least once.