I have dedicated my life for acting and literature: Jyoti Tripathi 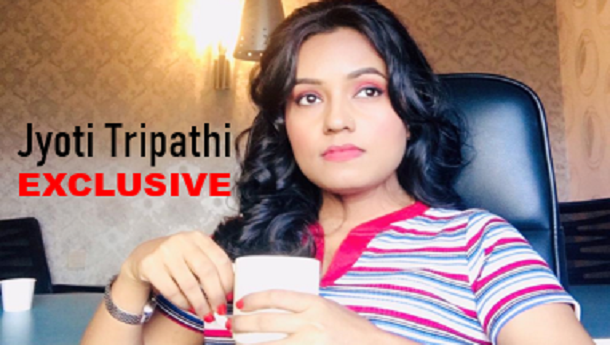 Jyoti Tripathi is a renowned poetess but Bollywood was always in her dream plan and she kept this dream alive. Finally, she moved to Mumbai in 2015 to make her career in Bollywood. After a strong struggle of five years in Mumbai, finally she got a ticket to Bollywood. Her debut film ‘Bhootaha’ is releasing this month only. Before entering into film industry, she earned lots of name, fame and money as a poetess. She belongs to a small town Pratapgarh, UP. In an exclusive interview with Bollywood Town, she spoke about her debut film ‘Bhootaha’, inspiration in Bollywood, future plans and more…

How much excited are you after the trailer launch of your debut film ‘Bhootaha’?

I'm quite excited about my debut film ‘Bhootaha’. This is a single character film. It's a very unique concept. Only 4-5 single character movies are made so far and this is one of them. I’m playing lead role in this film. The entire movie is shot in a single office premise. This will be the unique experience for audience.

What are your expectations from your debut film?

How did you get the ticket to Bollywood?

I came to Mumbai in 2015 with a vision to make my career in films. During lockdown in March 2020 I finally lost my hopes but meanwhile I got a call from director Rupesh Kumar Singh who offered me this film (Bhootaha). I liked the storyline so, without having any second thought I said ‘yes’ for this movie. I personally thanks director Rupesh ji who trusted and encouraged me during this bad phase of my career.

Who is your inspiration in Bollywood and why?

As an actor, Amitabh Bachchan ji is my inspiration in the industry. My story from childhood to Mumbai is very similar to his journey. I get encouragement from his life story. Also, I like Radhika Apte. She created her own space in the industry by changing the trends.

I have dedicated my life for acting and literature. I want to bring change in the society through whichever way possible, either through acting or poetry.