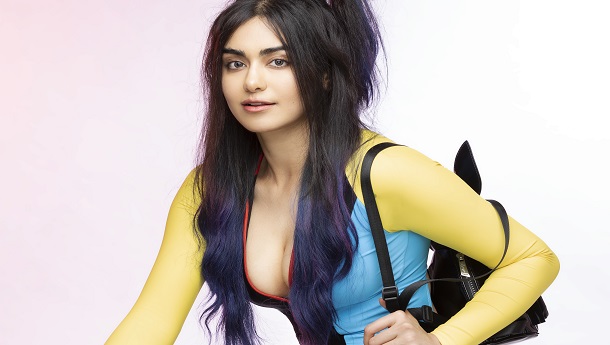 Adah Sharma is a renowned Bollywood actress who started her career with Vikram Bhatt’s hit movie '1920'. After doing couple of hit Hindi movies, she entered into South Indian film industry where she achieved commercial success and garnered her critical appreciation for her performances. Apart from being an actor she is also a trained Kathak dancer.  She likes animal lovers and people who do not complain all the time. Recently she has worked in a power-packed movie ‘Commando3’. In an exclusive interview with Yogesh Mishra, she revealed about her childhood days, working experience in Commando3, view point on ‘love’, future projects and more…

I went to a convent school. My school friends are still my friends now. Few of them stay in the same building too. They know all my secrets and everything about me. We learned cycling and rollerblading together. I think I enjoyed most parts of my childhood like I’m enjoying right now whatever hood this is.

How were you as a student?

I’m a very diligent person in whatever I do. I was always first in class till the 10th Std, then I decided not to study in school any more but in school it was easy. If you studied you get marks accordingly. If you practiced running daily being 1st in the race was possible. Even interschool competitions dance, elocution, singing I always had to do the best I could. I have never been competitive though. I somehow was never really interested in what others were doing. I just had to push myself to do something I've not done, sing a song in a different voice or some crazy thing. My mother always encouraged my madness. I'm happy she still does. It helps me be slightly sane.

How did you get your first break in Bollywood?

I was performing kathak at my 10th std annual day function and Asha Parekh was the chief guest. Her manager was there and he spoke to me and said I must do a film which had me dancing. I told him I wanted to be an actor and would love to do a dance film. The irony is even in the south films I've done I've hardly had any dancing. Now with social media people know I can dance and now finally I’m dancing opposite Prabhu Deva in a film. I had decided after my 10th to become an actress. So, he managed my work and I went for auditions. 1920 was one such audition and everything fell into place. Vikram Bhatt wanted someone who could act really well, who was not uncomfortable looking scary and we did a look test so that I looked like I was from the era. It worked out! and I got the best role any debutant could get ever!

You are a trained Kathak dancer too. Did that help in your career?

Any dance form gives your body grace. Also makes you expressive so I guess with those basics in place my face knows how to convey emotion. My body can pick up dance forms.

You have tasted success and failure both in your film career. How do you manage failure?

I'm very fortunate to be part of so many films that have done commercially and critically well. The critics and audience have been very kind to me from my first film. Even in films that they have disliked they still say nice stuff about me so that way I feel I've been quite successful. The biggest failure for me is choosing a film which I already know I shouldn't be doing. I have done this once. From all the films I've done... before we began the film I knew it was a mistake but I didn’t follow my instincts and did it anyway. I was miserable though the film. So for me that was a huge failure.

I do exactly the same stuff I do when I'm happy. I stick to routine. I watch movies, work out, I do everything I do but I sulk a little but I only share with people very close to me. If you don't know me too well you won't ever know because even when I'm very excited I'm very quiet sometimes.

Can you define the word 'love'?

When you can tolerate someone even when they are doing things you do not understand or dislike that's love for me.

Who is your inspiration in Bollywood?

Everyone who has come from outside (not belonging to a film family) and done even one film. All of them are my inspiration and of course people who have come so far, broken stereotypes! Like Priyanka Chopra.

Given a chance, would you like to join politics?

No. There are certain things I know I'm not inclined to, things I wouldn't be good at. Deep frying food, maths, stitching, politics to name a few. So I wouldn't voluntarily choose to do them.

What character are you playing in Commando3?

In commando 3, I reprise the same role Bhavana Reddy as I did in commando 2. She still has the Telugu accent in her Hindi. She is still funny sarcastic but when she does action she is super serious, doing kicks and punches was fun. I also learned silambam (laathi) for the film. When I shared videos on Instagram my fans loved it and now after watching the film it's just been a day but I'm getting sooo much love.

What are your upcoming films?

My next film is Man to Man. I try to do something different with each film. This time I'm playing a man. It's a love story where a boy falls in love with a girl and after marriage finds out she is a man. Holiday my debut web series also has a season 2. The format of one girl going on her bachelorette with 3 of her guy friends was super cool. I thought I have Tindey which is a short film by large short films and a few more interesting projects. Commando 4 is definitely happening after the super success of commando 3.