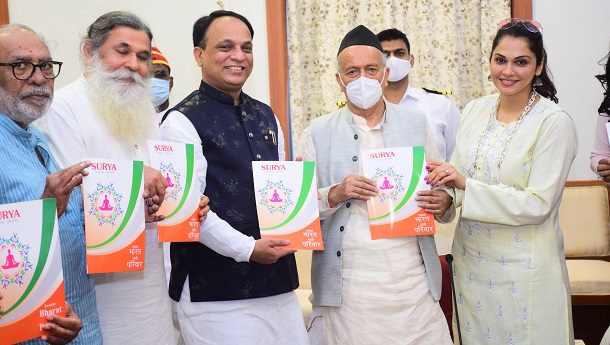 Isha Koppikar Narang is the Ambassador of International Naturopathy Organization and she is taking it places. She recently met up with the Honorable Governor of Maharashtra, Shri Bhagat Singh Koshiyari ji and they discussed it in detail. Naturopathy is one of the oldest health forms and it aims complete control of our lives onto our hands. It's a way of life and something that we should all be aware of. Isha has been an avid practitioner and she is going all out to spread its wings and bring about major awareness of this form of life. She is already going guns and knowing her we are assured that the cause is in great hands. Honorable Prime Minister Shri Narendra Modi ji has done great work in the field of naturopathy and yoga and he is looking forward to promoting it even further. This is in line with the vision of the Prime Minister and Isha is taking it ahead in the right direction.

We spoke to Isha on the developments and the meeting and here is what she has to say, "As the ambassador of International Naturopathy Organisation, we met up with the Honourable Governor of Maharashtra, Shri Bhagat Singh Koshyari ji to discuss and register Naturopathy and naturopathy practitioners.

We have given the recommendation for the development of naturopathy and yoga in Maharashtra. The honorable prime minister has done commendable work in yoga, naturopathy and other healty initiatives. The government of India has decided to construct hospitals of yoga and naturopathy in every district. They are doing fantastic work. They are constructing a hospital in Pune at a huge budget. The Government of India is going all out in promoting naturopathy and yoga. The Maharashtra government has passed the bill of yoga and naturopathy in the state of Maharashtra. It is cost-effective with no side effects and is drugless. We are doing that in almost 35 districts of Maharashtra. On the occasion of yoga day, our Honorable Prime Minister aims to spread this knowledge of yoga in 75 countries.

Apart from that, we discussed the benefits and the way ahead for naturopathy. It was a very fruitful discussion. It's a cure for the longest time and it is proven. It's a way of life and we become the best versions of ourselves with this one. Shri Bhagat Singh Koshiyari ji was extremely positive and that's a long road ahead but a very impactful beginning. I am filled with confidence after the meeting."